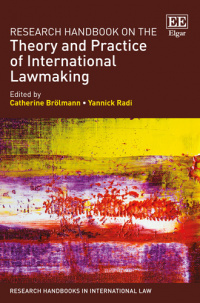 Research Handbook on the Theory and Practice of International Lawmaking

9781781953211 Edward Elgar Publishing
Research Handbooks in International Law series
Edited by Catherine Brölmann, University of Amsterdam, the Netherlands and Yannick Radi, University of Louvain (UCLouvain), Belgium
Publication Date: 2016 ISBN: 978 1 78195 321 1 Extent: 512 pp
The global landscape has changed profoundly over the past decades. As a result, the account of the making of international law based on the traditional theory of sources is increasingly challenged. This Handbook offers a comprehensive guide to the theory and practice of international law‐making today. It takes stock at both the conceptual and the empirical level of the instruments, processes, and actors involved in the making of international law. The book contains essays by leading scholars on key aspects of international law-making and on law-making in the main issue areas, with an interest in classic processes as well as new developments and shades of normativity.

The editors have taken an approach which carefully combines theory and practice in order to provide both an overview and a critical reflection of international lawmaking. Comprehensive and well-structured, the book contains essays by leading scholars on key aspects of international lawmaking and on lawmaking in the main issue areas. Attention is paid to classic processes as well as new developments and shades of normativity.

This timely and authoritative Handbook will be a valuable resource for academics, students, legal practitioners, diplomats, government and international organization officials as well as civil society representatives.
Critical Acclaim
‘A fascinating collection of essays that reveal the multiple facets of lawmaking in an increasingly interconnected world. In addition to the role played by States, numerous institutional and judicial actors now contribute to lawmaking. In charting these developments, this Handbook provides a rich analytical appraisal of the manifold normative processes in the contemporary international legal order.’
– Laurence Boisson de Chazournes, University of Geneva, Switzerland

'If any subject requires a guide, it is international lawmaking. Puzzling even to the experienced, yet critical to a proper understanding of contemporary order, lawmaking encompasses a startling array of participants, practices, subjects, doctrines, terms, institutions, theories, and goals across and at all levels of international society. Equal to the challenge, this Research Handbook cuts through the confusion and comprehensively and inclusively organizes and makes sense of the theory and practice of international lawmaking today.’
– Jacob Katz Cogan, University of Cincinnati College of Law, US

2. Subjects and Actors in International Lawmaking: The Paradigmatic Divides in the Cognition of International Norm-Generating Processes
Jean d’Aspremont

6. Lawmaking by Treaty: Conclusion of Treaties and Evolution of a Treaty Regimes in Practice
Daniel Costelloe and Malgosia Fitzmaurice

7. The Emergence of Customary International Law: Between Theory and Practice
Omri Sender and Michael Wood

8. Relying on General Principles in International Law
Beatrice I. Bonafé and Paolo Palchetti

PART III: INTERNATIONAL LAWMAKING BEYOND THE STATE
9. Institutional Lawmaking: The Emergence of a Global Normative Web
Ramses A. Wessel

Research Handbook on Law and Diplomacy