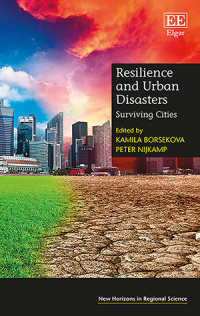 Chapters explore novel contributions on urban evolution and adjustment patterns based on studies from across the globe. Both causal mechanisms and policy responses to the high social costs of urban disasters are addressed. In particular, the book explores the socio-economic impacts on urban systems that are subject to disasters, including migration due to large earthquakes in Japan, the economic impact of terrorist attacks in Istanbul and labour market changes as a result of natural disasters in Italy.

Urban planning and urban economics scholars will greatly benefit from the multidisciplinary analyses of a variety of case studies in the book. City planners and urban administrators will also find the exploration of potential paths of resilience for cities to be an invaluable tool for future planning.
Critical Acclaim
‘Resilience and Urban Disasters: Surviving Cities is a resource endeavouring to contribute towards effectively addressing the need for comprehensive analysis of disaster impacts and how cities recover from disasters. The book centres on the significance of systemic perturbances in cities or urban agglomerations through presenting quantitative and qualitative tools for analysis of the urban recovery process following a shock. In this way, it also addresses the often-neglected effects from a shock rather than effects arising from gradual changes. Through its methodological and policy underpinnings, the volume contributes immensely to our understanding about how cities survive and recover from catastrophes.. . . The strength of Resilience and Urban Disasters, lies in the comprehensiveness of the methodological approaches used in individual chapters. Resilience and Urban Disasters is a valuable resource for readers interested in economic and policy-based themes of urban disasters and resilience. It ably captures methodological approaches and impact analysis of urban disasters, heavily using case studies from European and Asian countries, and another covering the global context.’
– Urban Studies

4. Population Change and Economic Impacts on the Affected Region: The Case of Massive Earthquakes in Japan
Yoshifumi Ishikawa

6. Resilience of Urban Systems in the Context of Urban Transformation: Lessons from Beykoz-İstanbul
Tuba Inal Çekiç and Mehmet Doruk Özügül

7. Arctic urbanization: resilience in a condition of permanent instability. The case of Russian Arctic cities
Nadezda Zamyatina and Ruslan Goncharov

11. Emerging Urban Dynamics and Labor Market Change: An Agent-Based Simulation of Recovery from a Disaster
A. Yair Grinberger and Daniel Felsenstein