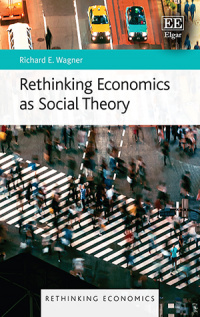 More Information
Critical Acclaim
Contents
More Information
Taking an innovative look at the origins of economics, this forward-thinking book relocates economics from a materialistic general theory of rational action into an idealistic theory of social organization and individual action. Adding new insightful analytical methods such as complexity theory, graph theory and computational modeling to the original insights of the Scottish Enlightenment, Richard Wagner explores economics in an ever-changing society, looking at the key civilizing processes and the important social questions.

Rethinking Economics as Social Theory moves away from the traditional review of analytical exercises and associated data and illustrates an enlightening scheme of thought where human societies are heterogeneous and not homogeneous and where change is continually in motion. Furthermore, Wagner theorises that economizing is a universal form of human action that plays out in numerous substantive directions and shows cooperation and conflict to have a yin-and-yang relationship.

This illuminating book will prove an excellent resource for economists interested in working outside of comparative statics as well as social scientists looking for a broader vision of economics. Philosophers and those working in the field of biological sciences will also find this an informative read.
Critical Acclaim
‘In Rethinking Economics as Social Theory, Richard E. Wagner offers an erudite and profound alternative to Max U, one that seeks to recover and embellish the insights of the Scottish Enlightenment. He invites us to consider social problems encompassing moral elements and to make room for complexity and time. In the spirit of Frank Knight, Wagner studies a “cacophonous” subject—society—comprising ever-shifting groups and subgroups and he reminds us that social systems are constantly in motion.’
– Sandra J. Peart, University of Richmond US

‘Richard E. Wagner creates an ingenious form of social theory that both integrates and transcends a variety of orthodoxies and heterodoxies. Using insights from complexity theory, network theory, and computational modeling, Wagner brings new life to ideas about spontaneous ordering within societies initially articulated during the Scottish Enlightenment, showing those insights to be as relevant today as when they were initially articulated.’
– Paul Dragos Aligica, George Mason University, US

‘Taking seriously the task of rethinking economics, Richard E. Wagner has gone to the center of it. We are spirited beings capable of hoping, hating, learning, and doing, not flesh-covered robots enslaved to our programming. Our liberty of self-construction is hell on administrators, but endlessly fascinating for the true student of society. Buy this book, read it all, and walk away wiser.’
– Roger Koppl, Syracuse University, US

‘“Economic theory began as social theory,” writes Richard E. Wagner, and in this new book he restores the analytical connections. Wagner exposes the limitations of most contemporary theorizing to grapple successfully with the complexity of the human condition, which gives rise to both social cooperation and coalitional conflict. Market–state dualism, in both theory and practice, has led to an expansion of public ordering, but Wagner suggests that it is only by broadening the scope of private ordering that we can invite human spiritedness back to the drama of our lives in society.’
– Lenore T. Ealy, Universidad Francisco Marroquín, Guatemala
Contents
Contents: Preface 1. Society as analytical object: some methodological challenges 2. Systems theory and parts-to-whole relationships 3. Cooperation, conflict, and the social organization of human activity 4. Rationality and the Janus-faced character of human reason 5. Markets, law, and moral imaginations: order theory redux 6. Main Street, Wall Street, and City Hall: exploring their entanglement 7. Civilizing processes and the social question reprised 8. Thymology, spiritedness, and the social organization of human activity 9. Rationality within systems: how time integrates subjective and objective probability 10. A portmanteau of themes in closing References Index
Add to Wish List
eBook for individuals
978 1 80220 476 6
From £25.00
Click here for options
eBook for library purchase
978 1 80220 476 6
View sample chapter and check access on: