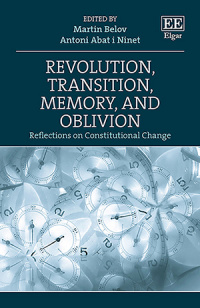 Contributions by leading scholars in the field explore the relationship between revolutions and constitutional order and disorder, considering in particular the impact of political transitions, situations of emergency, coup d´état and the role of memory and oblivion during times of revolution. Through a series of case studies, the book identifies ways in which these phenomena have, and will, affect the formation and amendment of constitutions in both the short and long term. This includes, most notably, those changes which seem to go against the spirit of constitutionalism. In so doing, it provides important insight into how constitutions and constituent powers deal with the influences of the past.

Students and scholars engaged in the study of constitutional law, legal theory, theories of the state, transitions of democracy and the philosophy of law will find this ground-breaking book to be a must read.

‘Revolution is all the rage—this new book appears at just the right time. Innovative and important, Revolution, Transition, Memory, and Oblivion offers new perspectives on how constitutions change, often radically and dramatically. Belov and Abat i Ninet have assembled an outstanding group of scholars whose chapters push the boundaries of our current knowledge on the interrelationships among revolution, rebellion, replacement, and constitutionalism. This book forces readers to rethink old views and to grapple with new insights.’
– Richard Albert, The University of Texas at Austin, US

‘We live in a time of sweeping constitutional transformation. The profound effects and implications of this ubiquitous development have created a critically important scholarly agenda, refining the analytical constructs for sharpening our comprehension of what it all means. The multidisciplinary contributors to this volume have responded splendidly to this challenge, offering up a methodologically and conceptually diverse set of assessments that valuably illuminate the complex issues kindled by the prevalence of radical constitutional change.’
– Gary J. Jacobsohn, The University of Texas at Austin, US

‘This collection of essays provides a host of original insights at this moment of global crisis. They invite the reader to gain a deep historical perspective upon the dilemmas we currently face in reconstructing a constitutional order that can meet the challenges of the twenty-first century. Nobody can predict the future, but we can learn a good deal from the successes and failures of the past.’
– Bruce Ackerman, Yale Law School, US
Contributors
Contributors: A. Abat Ninet, M. Belov, E. Cartier, M. Florczak-Wątor, F. Gárdos-Orosz, S. Groysman, A. Kutay, X. Souvignet, Y. Stoilov, Z. Szente, A. Tsekov, M. Zalewska

PART I CONSTITUTION, REVOLUTION, AND LAW
1 Conceptualising the relationship between revolutions and
constitutions 2
Antoni Abat i Ninet
2 Revolution and interpretation: what is a legal revolution? 18
Xavier Souvignet
3 Revolution in law 31
Yanaki Stoilov
4 Constitutional revolutions beyond liberalism: a realist critique 54
Acar Kutay

PART II NORMATIVIST DISCOURSES ON LEGAL
AND CONSTITUTIONAL REVOLUTION
5 The basic norm at the time of the revolution 71
Monika Zalewska
6 On the Kelsenian concept of revolution: a theory of the
relationship between social and legal revolution and the
case of the first Bulgarian constitutional transition (1944–1947) 91
Simeon Groysman