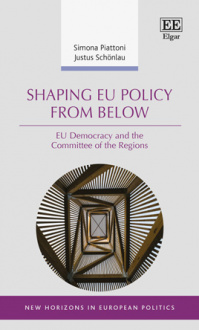 EU Democracy and the Committee of the Regions

9781783472710 Edward Elgar Publishing
New Horizons in European Politics series
Simona Piattoni, Professor of Political Science, Department of Sociology and Social Research, University of Trento, Italy and Justus Schönlau, Committee of the Regions, Belgium
Publication Date: 2015 ISBN: 978 1 78347 271 0 Extent: 200 pp
This book looks at the way in which the Committee of the Regions (CoR) can influence EU policy making from below, despite its relatively weak position in the decision-making process. Bringing together theoretical arguments about the central role of the formation of judgment in addition to the more conventionally emphasized expression of will, with an up-to-date account of the CoR's institutional development and activities, Simona Piattoni and Justus Schönlau make a strong case not to overlook the significance of the Committee's contribution to EU-level democracy.

More Information
Critical Acclaim
Contents
More Information
This ground breaking book looks at the way in which the Committee of Regions (CoR) can influence EU policy making from below, despite its relatively weak position in the decision-making process. In essence, the authors argue that the CoR plays a significant role in the EU's political process, going well beyond its formally limited advisory function.

By applying theoretical considerations about the expression of judgment and the formation of will in democratic systems, the authors develop a normative argument about why it is opportune that local and regional concerns be involved in shaping European Union decisions. Moreover, by looking at the institutional development of the Committee, and by analyzing its contribution in key policy areas, the book shows why the CoR is already a very important element of the multi-level democratic system of the European Union.

Academics, researchers and students will benefit from the up-to-date analysis of the CoR. Functionaries in the EU institutions, European regions and localities, state bureaucracies and political party members will find the new insights provided in this book to be of interest.

Critical Acclaim
‘This is the first in-depth study of the Committee of the Regions and its role in the European policy process. It is rooted in the theory of European integration, including the “normative turn”, and will be essential reading for students of multilevel European politics.’
– Michael Keating, University of Aberdeen, UK

‘Piattoni and Schönlau’s innovative, careful, and multi-disciplinary analysis of the CoR helps us reconsider not only that institution but also EU democracy and governance. It deserves to be widely read by all who seek ways to improve EU governance or to understand the role of sub-state actors in EU politics.’
– Alex Warleigh-Lack, Visiting Fellow, UNU-CRIS

‘Piattoni and Schönlau’s work is that rare combination of careful analysis and passionate argument. As the former, it is easily the most thorough and sophisticated study of how the Committee of Regions fits in the EU’s institutional structure and the role it plays in its policy making process. As the latter, it is a theoretically astute, and normatively inspired defence of the way in which the CoR contributes to the articulation of democratic voice within the EU’s multilevel structure of governance. As such, it is a reflection on how democratic representation works in complex societies, and it should be read by those interested in the legitimacy of the European Union and the question of democratic legitimacy at large.’
– Dario Castiglione, University of Exeter, UK

A Research Agenda for Evaluation