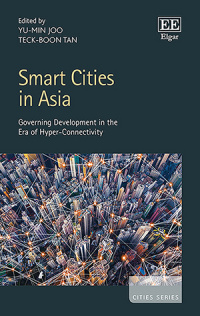 Governing Development in the Era of Hyper-Connectivity

More Information
Critical Acclaim
Contributors
Contents
More Information
At a time when Asia is rapidly growing in global influence, this much-needed and insightful book bridges two major current policy topics in order to offer a unique study of the latest smart city archetypes emerging throughout Asia. Highlighting the smart city aspirations of Asian countries and their role in Asian governments’ new development strategies, this book draws out timely narratives and insights from a uniquely Asian context and policymaking space.

Each carefully curated chapter studies a national or local government-led smart city project and how it specifically relates to local institutions, political dynamics and development challenges in a region that is rapidly urbanising and growing economically. Collectively, these pressing contributions offer a comparative look at the policies and practices of smart cities, seen through the lens of local scholars and experts.

Thoughtful and engaging, this book will prove valuable reading for students and scholars of public policy and Asian studies, as well as those with a specific interest in urban studies and planning, and science and technology policy. Policymakers and practitioners will also benefit from the rich information and up-to-date analysis on offer.
Critical Acclaim
‘Many cities have already started transitioning to smart cities as described in Smart Cities in Asia and will continue to emerge following the path of the cities explored in this informative and insightful collection of case studies containing valuable lessons for a smart city future to come.’
Balazs Laki, Progress in Development Studies

‘Smart Cities in Asia is a timely addition to the ongoing debate about the local manifestation of this globally circulating policy idea.’
– Christian Dimmer, Pacific Affairs

‘This book is a timely and welcome addition to the growing body of knowledge on smart cities in Asia. Covering major smart cities in East, Southeast and South Asia, it thoughtfully examines the reasons why these conurbations are eagerly jumping onto the smart cities bandwagon, their progress so far and the key policies introduced. Focusing on an increasingly important region in the global economy, this edited volume is not only an important contribution to the literature but also an essential read for anyone interested in smart cities in Asia.’
– Kwok Yan Lam, Nanyang Technological University, Singapore