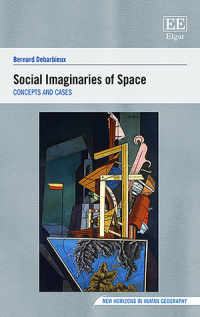 9781788973861 Edward Elgar Publishing
New Horizons in Human Geography series
Bernard Debarbieux, University of Geneva, Switzerland Translated from French by Sheila Malovany Chevallier
Publication Date: 2019 ISBN: 978 1 78897 386 1 Extent: 224 pp
Travelling through various historical and geographical contexts, Social Imaginaries of Space explores diverse forms of spatiality, examining the interconnections which shape different social collectives. Proposing a theory on how space is intrinsically linked to the making of societies, this book examines the history of the spatiality of modern states and nations and the social collectives of Western modernity in a contemporary light.

Advanced geography scholars will find the analysis of space and its impact on societies a valuable tool in understanding the ways in which space, culture and behaviour interact. Historians of Western modernity will also benefit from Debarbieux’s analysis of case studies that impact modern life.
Critical Acclaim
‘The real strength of this book lies in how it demonstrates the intertwining nature of social space and nature through a historical and spatial lens. To this end, it would make a useful companion to any researcher looking to further this necessary work, and indeed would make an ideal core textbook for more advanced postgraduate courses on the connection between social space, ideals of nature and regional space.’
– Philip Lawton, Regional Studies

‘This book provides a fascinating overview of practices through which the modern nation-state aligned itself to its territory, and is an invitation to consider how the spatial forms of contemporary state imaginaries are transforming.’
– Sander van Lanen, Tijdschrift voor Economische en Sociale Geografie