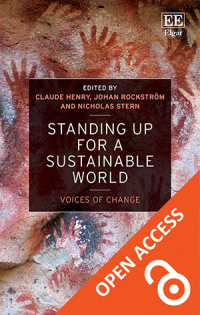 The world has witnessed extraordinary economic growth, poverty reduction and increased life expectancy and population since the end of WWII, but it has occurred at the expense of undermining life support systems on Earth and subjecting future generations to the real risk of destabilising the planet. This timely book exposes and explores this colossal environmental cost and the dangerous position the world is now in. Standing up for a Sustainable World is written by and about key individuals who have not only understood the threats to our planet, but also become witness to them and confronted them.

More Information
Critical Acclaim
Contributors
Contents
More Information
The world has witnessed extraordinary economic growth, poverty reduction and increased life expectancy and population since the end of WWII, but it has occurred at the expense of undermining life support systems on Earth and subjecting future generations to the real risk of destabilising the planet. This timely book exposes and explores this colossal environmental cost and the dangerous position the world is now in. Standing up for a Sustainable World is written by and about key individuals who have not only understood the threats to our planet, but also become witness to them and confronted them.

Combining the voices of leading academics as well as climate change and environmental activists, entrepreneurs and investors, the book highlights the urgent action that needs to be taken to foster sustainable, resilient and inclusive development in the face of powerful systemic forces. Chapters look ahead to a better path for human wellbeing, security and dignity, offering insight to ways this can be created. The book as a whole shares the visions and hopes of those fighting in a myriad of ways to make a sustainable world, attempting to tip the balance away from the crushing loss of biodiversity, rising sea levels and increasing global mean temperature, whilst increasing living standards across all dimensions, particularly for the poorest people.

An imperative read for those concerned about the future of our planet, this book showcases not only why urgent action is now imperative, but also what changes are necessary for a sustainable, resilient and equitable world. It offers crucial insights for those interested in the dynamics of political action, in how change occurs, and in effective communication. Environmental economics, as well as environmental studies and human geography students and scholars more broadly will find this an invigorating read.

Critical Acclaim
‘The breadth of coverage is impressive both topically and geographically. The science is accurately depicted, and tales are realistically explained. This unusually well-written book is available directly from the publisher via open access. Highly recommended.’
– R E O’Connor, CHOICE Review of the Week

‘The text is frequently passionate, but never shrill. The breadth of coverage is impressive both topically and geographically. The science is accurately depicted, and tales are realistically explained. This unusually well-written book is available directly from the publisher via open access.’
– R E O'Connor, CHOICE

‘This is the first major attempt at conveying to the world, both the need for urgent action to curb climate change, and the multiple channels that can be activated to achieve that goal. Leading academics, environmental activists, entrepreneurs and investors have been asked to lay out ideas on how to make economic development more sustainable and more inclusive. This book is a must-read for all economists and more broadly anyone interested about making the world a better place.’
– Philippe Aghion, College de France, and London School of Economics, UK

‘Standing Up for a Sustainable World underscores the inexorable link between social justice and environmental justice. While people living in extreme poverty are the least responsible for climate change and environmental damage, they are undoubtedly the most impacted by its consequences. Therefore, it is urgent and essential to strengthen the resilience to climate change of people living in poverty, but only through social and economic change that leaves no-one behind, and which actively involves them in making decisions that affect their lives.’
– Donald Lee, President of the International Movement ATD Fourth World, UK and previously at the UN Department of Economic and Social Affairs, US

‘We are confronted with loss of biodiversity and ecosystem services globally at unprecedented level. This could be attributed to a number of factors: climate change, deforestation, land use change for agricultural expansion, economic imbalance due to unfair trading practises. If we do not take urgent and immediate actions to address these issues, we might suffer irreversible changes affecting the future of our planet and the fate of future generations. This book provides expert opinion and forward looking thoughts to current global challenges. The book links science with policy in ways that will prompt policy makers into actions. Hence, I wholeheartedly recommend the book to be read by all interested in nature’s health and sustainable benefits.’
– Sebsebe Demissew, Addis Ababa University, Ethiopia, (foreign) Member of the Royal Society, UK and Co-Chair (2013-8) of the IPBES Multidisciplinary Expert Panel, Germany

‘It is easy to say, as is frequently repeated, that the future of humanity on earth is at risk. The difficult challenge is to understand the empirical basis of that terrible fear, and also to assess, with best professional scrutiny, what we can do to resist the environmental catastrophe. It is wonderful that we can turn to this wide-ranging study for guidance on each.’
– Amartya Sen, Harvard University, US

‘Reading Standing up for a Sustainable World is essential to understand our times. Claude Henry, Johan Rockström and Nicholas Stern, three internationally renowned academics, have collected the voices of those – activists, entrepreneurs, academics – who are taking action to build a more resilient world. We should learn from them in order to change our economic and social model, reduce inequalities and lay the foundations for a better future.’
– Anne Hidalgo, Mayor of Paris, France

'We are clearly at a fork in the road in the quest to ensure that our children and grandchildren have a liveable planet. This unique book goes well beyond the endless projections, scenarios and storylines that promise a sustainable future but never really deliver. Instead, this book goes to “ground zero” and explores the mushrooming number of new and exciting approaches already being implemented – revolutionary energy technologies, innovative legal tactics, novel communication tools, community stands against ecological destruction, and many more. Each one on its own can’t solve the immense, urgent challenges that face humanity in our quest for long-term sustainability, but together they can move us towards the social tipping point that can deliver the future we want at the scale and in the time period that we need.’
– Will Steffen, Australian National University, and former executive director of the International Geoscience-Bioscience Programme

‘There is so much doom and gloom about the state of the environment due to our greedy plundering of the planet’s finite natural resources that many people are losing hope. Therefore Standing up for a Sustainable World: Voices of Change comes not a moment too soon: it showcases projects from around the world that illustrate what can be done to turn things around before it is too late. Projects that will provide jobs and improve things for people, animals, and the environment. It is a book everyone who cares about our future should read.’
– Jane Goodall DBE, Founder of the Jane Goodall Institute and UN Messenger of Peace

PART II DEFENDERS
9 Introduction to Part II 117
Jonathan Watts
10 To protect the Amazon, defend the people of the forest 125
Maria do Socorro Costa Silva
11 Of chainsaws and grace: direct action by eco-vigilantes in
the Philippines 128
Bobby Chan
12 Social justice goes hand in hand with environmental
campaigns – and not just in Africa 131
Phyllis Omido
13 Living our values: using art and technology to campaign
for nature in Turkey 134
Birhan Erkutlu and Tuğba Günal