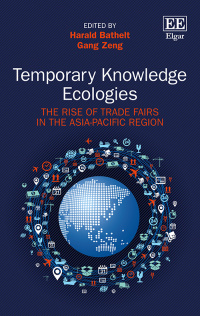 The Rise of Trade Fairs in the Asia-Pacific Region

Researchers and students of economic geography, political economy and related disciplines interested in exploring the role of the developmental state in the Asia-Pacific region will find this book to be highly relevant. Policy makers and regional planners seeking to understand the role of international trade fairs will also find this to be an insightful study.

Critical Acclaim
‘Bathelt and Zeng have put together a stellar collection that is truly original. The book develops a rich understanding of trade fairs in knowledge ecologies, and in doing so provides the reader with a sophisticated analysis of the local-global dynamics of such events. Moreover, the book also offers one of the first comprehensive analyses of the role of trade fairs in the Asia Pacific region, thus illuminating the significance of such events for the global economy.’
– James Faulconbridge, Lancaster University, UK

9. Local Industry Structure and the Formation of Temporary Clusters: The Case of the Shanghai International Auto Show (SIAS)
Xiang Kong and Yu-Fei Zhang

11. Trade Fairs in Peripheral Places: Toward a Political Economy of Australian Fashion Events
Sally A. Weller

13. Upgrading of Latecomer Industries in Taiwan and the Case of the Taipei International Machine Tool Show
Liang-Chih Chen and Ling-I Chu

14. How and Where Tigers Roam: The Role of Korean Trade Fairs in Supporting Firms’ Export Activities
Ronald V. Kalafsky and Douglas R. Gress