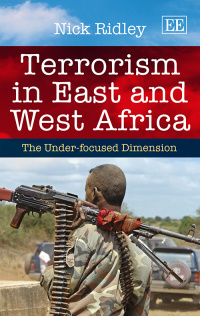 Terrorism in East and West Africa

9781783470518 Edward Elgar Publishing
Nick Ridley, Liverpool John Moores University, UK
Publication Date: 2014 ISBN: 978 1 78347 051 8 Extent: 240 pp
Since 9/11, despite extensive international efforts against global terrorism, there has been a misfocussing on the terrorism in Africa. This timely book draws upon the author’s experience as a former intelligence analyst, to give an account of terrorism in East and West Africa in the first two decades after the 9/11 attacks. It analyses why there is an incorrect strategic approach to this threat and will serve as a valuable compendium detailing terrorist groups and their activities in Africa to those studying terrorism.

More Information
Critical Acclaim
Contents
More Information
Since 9/11, despite extensive international efforts against global terrorism, there has been a worrying lack of focus on terrorist activity in Africa. Terrorism in East and West Africa: The Under-focused Axis addresses this strategic deficit by drawing together and analysing the various domestic and international counter-terrorist measures that have been carried out in East-West Africa since this infamous attack.

In his analysis Dr Ridley emphasises the need to avoid apportioning blame, preferring instead to conduct a thorough examination of counter-terrorist financing measures in certain African countries, as well as looking at the problems associated with their implementation. In this context, the author explains how Western impositions, guidance, and assistance have compounded the ineffectiveness of such measures. This timely book draws upon the author’s experience as a former intelligence analyst, to give an account of terrorism in East and West Africa in the first two decades after the 9/11 attacks. Throughout the book there is a questioning of why there has been, and continues to be, an incorrect strategic approach to this threat.

This book explores counter-terrorism measures in East and West Africa from an original perspective and delivers an important resource for scholars of terrorism laws, strategies, and politics.
Critical Acclaim
‘Terrorism in East and West Africa provides a highly interpretative analysis of under-focusing in intelligence assessment. Essential reading for students of terrorism and anti-terrorist practitioners.’
– Barry Rider, Jesus College, University of Cambridge, UK

‘This is an interesting and challenging book that will be of interest to those who know nothing of terrorism in Africa but also to those who are familiar with the patterns of conflict in that continent. A former practitioner, the author brings practical analysis to a range of terrorist groups on the continent that range over significant areas of East, West and Central Africa, producing a book that is of considerable value and that fills a clear gap in current analysis.’
– Paul Jackson, University of Birmingham, UK