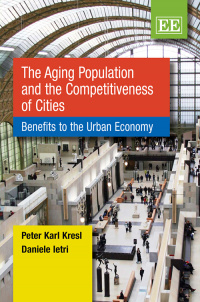 The Aging Population and the Competitiveness of Cities

Benefits to the Urban Economy

9781848442122 Edward Elgar Publishing
Peter Karl Kresl, Charles P. Vaughan Professor of Economics (Emeritus), Bucknell University, US and Daniele Ietri, Free University of Bozen-Bolzano, Italy
Publication Date: 2010 ISBN: 978 1 84844 212 2 Extent: 208 pp
While much of the current literature on the economic consequences of an aging population focuses on the negative aspects, this enlightening book argues that seniors can bring significant benefits – such as vitality and competitiveness – to an urban economy.

More Information
Critical Acclaim
Contents
More Information
While much of the current literature on the economic consequences of an aging population focuses on the negative aspects, this enlightening book argues that seniors can bring significant benefits – such as vitality and competitiveness – to an urban economy.

The authors illustrate the ways an aging population can have a positive impact on urban centers, including the move by large numbers of seniors from the suburbs to the city, where their disproportionate consumption of education and the arts helps rejuvenate city centers. Given this, the authors conclude that a large and active senior population has the potential to assist a city in the achievement of its strategic economic objectives. The book includes analyses of the effects of population aging on best practices in 40 cities in the US and EU, with surprising results, as well as interviews with city officials and leaders.

Academics, researchers and public officials in the areas of urban development, public policy and aging will find much in this original approach to interest and provoke debate.
Critical Acclaim
‘The authors deserve credit for “rowing against the stream” and asking our attention for the possible contributions of seniors to the urban economy. Hopefully their book will inspire researchers and students to continue exploring this issue in more detail. It may also serve as an eye-opener in urban policy circles as it pays attention to a segment of society that may have been overlooked in this age of “creative city” and “knowledge city” strategies.’
– Marco Bontje, International Journal of Housing Policy
Contents
Contents: Preface 1. An Aging Population – Good News for Cities? 2. The Demographic Situation in the US and in the EU 3. The Consequences for National and Sub-national Governments 4. The Consequences for Urban Economies 5. Urban Economies in the US 6. Urban Economies in the EU (ex Italy) 7. An Examination of Italian Urban Economies 8. A Look to the Future for Policy Makers: Best Practices 9. Final Thoughts References Index
Add to Wish List
eBook for individuals
978 1 84980 693 0
From £25.00
Click here for options
eBook for library purchase
978 1 84980 693 0
View sample chapter and check access on: