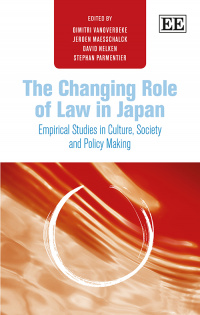 9781783475643 Edward Elgar Publishing
Edited by Dimitri Vanoverbeke, Professor and Director, Department of East Asian and Arabic Studies, KU Leuven, Belgium, Jeroen Maesschalck, Professor of Criminology, Faculty of Law, University of Leuven (KU Leuven), Belgium, David Nelken, Professor of Comparative and Transnational Law, The Dickson Poon School of Law, King's College London, UK and Stephan Parmentier, Professor of Sociology of Crime, Law, and Human Rights, University of Leuven (KU Leuven), Belgium
Publication Date: 2014 ISBN: 978 1 78347 564 3 Extent: 296 pp
The Changing Role of Law in Japan offers a comparative perspective on the changing role of law in East Asia, discussing issues such as society, cultural values, access to the legal system and judicial reform. This innovative book places Japan in the wider context, juxtaposed with Europe, rather than the US, for the first time.

More Information
Critical Acclaim
Contributors
Contents
More Information
The Changing Role of Law in Japan offers a comparative perspective on the changing role of law in East Asia, discussing issues such as society, cultural values, access to the legal system and judicial reform. This innovative book places Japan in the wider context, juxtaposed with Europe, rather than the US, for the first time.

Parallel to Japan’s rise to economic prominence on the world scene in the 1960s, law and legal thinking in the country have become the focus for academic research in various respects. One recurring question has been how Japan managed to become one of the most important economic actors in the world, without the legal infrastructure usually associated with complex economic activities. This book addresses many current issues that illustrate important changes in Japanese society and its political and legal systems. The authors investigate fundamental questions about the precise role of law and the courts in Japan, and try to go beyond the classical paradigm that attributes the particularities of Japan to its unique culture or its exceptional position. The various contributions to this book all demonstrate the importance of challenging existing conceptions and revisiting them through meticulous socio-legal and empirical research.

This book will appeal to scholars of sociology of law, international studies and those interested in a transnational approach to the legal framework. Graduate students dealing with law in Asia, intellectual property, patent law and competition law will also find much relevance in this interesting and stimulating book.
Critical Acclaim
‘The role of culture in the operation of Japanese law is one of the great questions of sociolegal studies. Discussions tend to polarize, between a simplistic view of cultural determinism and a more universalist approach that emphasizes institutions. This superb collection, with a diverse and accomplished set of contributors, takes culture seriously. It shows how legal institutions have both shaped and been shaped by Japanese legal culture. A state-of-the art assessment of Japanese law after more than a decade of reforms, this book is a must for anyone interested in understanding legal culture more broadly.’
–Tom Ginsburg, University of Chicago Law School, US

5. Reforms of the Judiciary in Japan at the Start of the Twenty-first Century: Initial Assessment of an Ongoing Process
Dimitri Vanoverbeke and Takao Suami

7. Toward an Understanding of the ‘Japanese’ Way of Dispute Resolution: How is it Different from the West?
Hiroshi Takahashi

PART III: THE TURN TO COURTS? A CHANGING ROLE FOR LEGAL ACTORS
9. Regulatory Enforcement of Environmental Law in Japan: An Analysis of the Implementation of the Water Control Pollution Act
Ayako Hirata

10. Access to Attorneys in Japan and Judicial Reform
Ryo Hamano

PART IV: THE (RE)TURN TO EUROPE? SIGNS OF CONVERGENCE
13. What Keeps Plaintiffs Away from the Court? An Analysis of Antitrust Litigation in Japan, Europe and the US
Simon Vande Walle

14. Revisiting Japanese Exceptionalism within the Context of ‘Dynamic Patent Governance’: A Comparative Analysis of the Japanese and European Patent System
Esther van Zimmeren

15. Rule of Law and Human Rights in the Context of the EU–Japan Relationship: Are Both the EU and Japan Really Sharing the Same Values?
Takao Suami