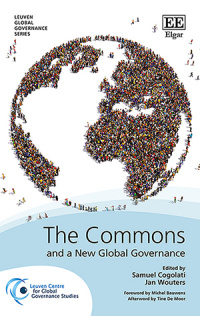 The Commons and a New Global Governance

More Information
Critical Acclaim
Contributors
Contents
More Information
Given the new-found importance of the commons in current political discourse, it has become increasingly necessary to explore the democratic, institutional and legal implications of the commons for global governance today. This book analyses and explores the ground-breaking model of the commons and its relation to these debates.

Featuring original contributions from renowned scholars across the globe and analysis of Elinor Ostrom’s fundamental work, this interdisciplinary book is organized into three main areas of inquiry: the commons as vehicles for the democratization of global governance, the role played by commons-based institutions in global governance and a more normative interrogation around what international law ought to look like to support the commons. Provocative and critical ideas about the current system of global governance act as a stimulus to explore further research and activism in the commons.

The first of its kind to offer a specific focus on the commons and global governance, this much-needed book will prove invaluable for academics in the humanities and social sciences including economists, political philosophers, political scientists and legal scholars. It will also appeal to policy-makers, concerned members of civil society and commons activists.
Critical Acclaim
‘Whereas the existing literature generally studies small-scale commons, this challenging book boldly – and successfully – engages in extrapolating this cooperation-based governance model to global resources. From democratic perspectives to institutional construction, its many contributions, written by prominent scholars in the field of commons or international law, critically introduce and renew the radical notion of commons and collective action by citizens, as vehicles for democratization, in global governance and international public law.’
– Séverine Dusollier, Sciences Po Law School, France

‘Can we devise new systems of law and governance to support commons at the global level? This thoughtful collection of essays explores how we might address this vital challenge for humanity in the years ahead.’
– David Bollier, Schumacher Center for a New Economics, US

‘A timely interrogation of the possibilities of global commons to replace a global system that for too long has made the vast majority of us pay too high a price. Here we find an exploration of a framework that can replace neoliberal global governance and empower the many.’
– Massimo De Angelis, University of East London, UK

‘The time has come for researchers and scientists to focus their efforts on potential global governance mechanisms for the commons, existing or to come. This is precisely what has inspired this volume and why it should be considered a significant milestone in the study of the commons at the global level.’
– Michel Bauwens, founder of the Foundation for Peer-to-Peer Alternatives

‘The insights provided in this book based on research by “commons-thinkers” will not just make it easier to connect to “commons-analysers” but also to the “commons-doers”, who are demanding a better understanding of what they are actually putting into practice, on a daily basis.’
– Tine De Moor, Utrecht University and former President of the International Association for the Study of the Commons (IASC) (2015–17)

Part I Democratic Perspectives
2. What Democracy for the Global Commons ?
Pierre Dardot

4. A (Non-)Violent Revolution? Strategies of Civility for the Politics of the Common
Christiaan Boonen

5. Forget Ostrom: From the Development Commons to the Common as Social Sovereignty
Pierre Sauvêtre

Part II Institutional Perspectives
6. Governance of the Global Commons: A Question of Supply and Demand, the Answer of Polycentricism
Rutger Hagen and Christophe Crombez

7. The Rule of Law and Accountability – Exploring Trajectories for Democratizing Governance of Global Public Goods and Global Commons
Maja Groff and Sylvia Karlsson-Vinkhuyzen

Part III Legal Perspectives
10. The Ecology of International Law: Towards an International Legal System in Tune with Nature and Community?
Ugo Mattei

11. From Eroding to Enabling the Commons: The Dual Movement in International Law
Olivier De Schutter

12. International Law to Save the Commons
Samuel Cogolati and Jan Wouters

13. Procedure and Substance in International Environmental Law and the Protection of the Global Commons
Jutta Brunnée

Part IV Conclusion
14. Is the Governance of the Commons a Model for a New Global Governance?
Martin Deleixhe

The European Court of Human Rights

The Global Rise of the Modern Plug-In Electric Vehicle