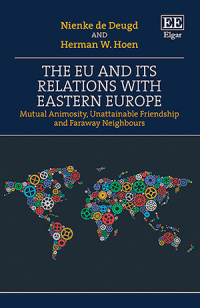 The EU and its Relations with Eastern Europe

More Information
Critical Acclaim
Contents
More Information
The politico-economic relations between the European Union (EU) and Eastern Europe are currently entering a new phase, which some scholars qualify as a revival of the Cold War. This insightful book seeks to explain whether and why a Cold War Europe has returned and discusses underlying factors that clarify the relations between East and West since the Second World War.

Nienke de Deugd and Herman W. Hoen comprehensively address the problematic process of EU integration, discussing crucial political, economic and security-related developments during and after the Cold War. De Deugd and Hoen draw attention to the path-dependent nature of European market reform and the processes of democratization in Eastern Europe as key factors in complicating post-communist transformation. Considering the alternating historical developments between rapprochement and estrangement, they illustrate underlying irreconcilable political-economic systems that have disrupted relations between the EU and Eastern Europe.

This book is a crucial read for students of political science and international relations, particularly those focused on post-communist transformation looking for a wide-ranging overview of the dynamics of transformation and integration in post-Cold War Europe.
Critical Acclaim
‘In their ambitious new book, Professors de Deugd and Hoen argue that European countries are not “backsliding” and East-West relations are not “deteriorating”; instead we are seeing deep and enduring institutional tensions in how politics and economics are interconnected come once again to the surface. This argument is essential reading for anyone seeking to understand the fate of post-Cold War Europe.’
– Erik Jones, Johns Hopkins University, US

Contents
Contents: Preface 1. Introduction to The EU and its Relations with Eastern Europe 2. East-West integration during the Cold War: an impossible affair 3. Economic reform and democratization in Eastern Europe after 1989: dressing the bride 4. The accession of Central and Eastern European countries to the European Union: a new love affair? 5. The Balkans: coping with partners who suffer from violent childhood experiences? 6. The relations with Belarus, Ukraine and Moldova: unattainable amity and convulsive love-hate affairs 7. The relations with the Caucasus: a fiancée with a complicated character 8. Central Asia and the need for neighbourly concerns 9. The EU and the Russian Federation: an unwanted marriage of convenience 10. Conclusion to The EU and its Relations with Eastern Europe Bibliography Index
Add to Wish List
eBook for individuals
978 1 78536 540 9
From £25.00
Click here for options
eBook for library purchase
978 1 78536 540 9
View sample chapter and check access on: