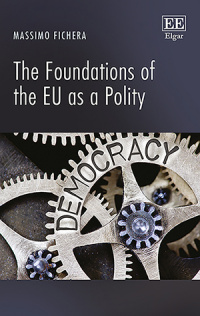 The Foundations of the EU as a Polity

9781785363894 Edward Elgar Publishing
Massimo Fichera, University of Helsinki, Finland
Publication Date: 2018 ISBN: 978 1 78536 389 4 Extent: 224 pp
In this insightful book, Massimo Fichera provides an original account of European integration as a process. He argues that European constitutionalism has been informed from its earliest stages by a meta-rationale, which is expressed by security and fundamental rights as discourses of power. Employing this descriptive and normative conceptual framework to analyse the development of the EU as a polity, chapters cover significant recent events such as the Eurozone crisis, the refugee crisis, the rule of law crisis, Brexit and the constitutional identity crisis.

More Information
Critical Acclaim
Contents
More Information
In this insightful book, Massimo Fichera provides an original account of European integration as a process – completed by the creation of the Area of Freedom, Security and Justice. The study builds upon a demonstration of how European constitutionalism has been informed by a meta-rationale, which is expressed by security and fundamental rights as discourses of power.

The book uses this conceptual framework to analyse the development of the EU as a polity. Chapters cover significant recent crises, including the Eurozone, refugees, the rule of law, Brexit and constitutional identity. These events are not only recognized as being political shocks, but more meaningful and long-lasting occurrences which have had, and will continue to have, a deep impact on the development of the EU as a legal and political system. In light of this, the variety of crises that have recently affected the EU are discussed with thought given to their impact as an interlinking whole.

Adeptly combining both theoretical and doctrinal analysis, this book will appeal to students and scholars of both EU law and politics, as well as those interested in legal and political theory more widely. Government officials, policymakers and practitioners will also find this a stimulating read.
Critical Acclaim
‘Fichera’s book is an original contribution to the field, which will – without a shadow of doubt – be viewed by members of the target audience with a great interest.’
– Jaakko Husa, CML Review

‘This book is aimed at academics in the field of international law, with a particular focus on the EU, its make-up and politics. It is an excellent research tool, which provides a wealth of information on the topic addressed in the title – The EU as a Polity. . . The book is thorough in its examination and does answer the questions in which it sets out to tackle.’
– Janet Furness, Legal Issues Journal

‘Today we are swamped with analyses of and solutions to the current crises of the EU that pay insufficient attention to the historical roots of our present problems. Fichera is an exception. He is particularly alive to the deep preoccupation of the European project with matters of security and rights, and has produced an account that is as complex and subtle as it is accessible and compelling.’
– Neil Walker, The University of Edinburgh, UK

‘Boldly asserting that constituting itself as an Area of Freedom, Security and Justice is the very core of the EU as a political and legal project, Fichera shows, in this incisive and illuminating book, that security is both the presupposition of, and a threat to, the project of European integration.’
– Hans Lindahl, Tilburg University, the Netherlands
Contents
Contents: Preface Acknowledgements 1. EU constitutionalism, crisis and the security of the European project 2. Discursive constituent power and European integration 3. The resilience of the principle of proportionality 4. The foundations of the EU as a polity 5. Reflexive security Bibliography Index
Add to Wish List
eBook for individuals
978 1 78536 390 0
From £25.00
Click here for options
eBook for library purchase
978 1 78536 390 0
View sample chapter and check access on: