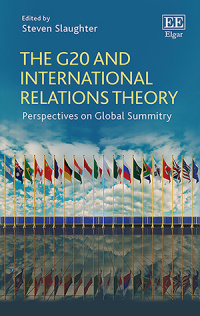 The G20 and International Relations Theory

9781786432643 Edward Elgar Publishing
Edited by Steven Slaughter, Associate Professor in International Relations, School of Humanities and Social Sciences, Deakin University, Australia
Publication Date: 2019 ISBN: 978 1 78643 264 3 Extent: 240 pp
The future of the G20 is uncertain despite being developed to address the 2008 global financial crisis. This book considers the significance of the G20 by engaging various accounts of International Relations theory to examine the political drivers of this form of global governance. International Relations theory represents an array of perspectives that analyse the factors that drive the G20, how the G20 influences world politics and in what ways the G20 could or should be reformed in the future.

More Information
Critical Acclaim
Contributors
Contents
More Information
This book considers the current and future significance of the G20 by using International Relations theory to examine its political impact as an informal form of global governance. International Relations theory is shown to represent a broad range of political positions that can effectively analyze the various factors that influence world politics.

The contributions to this book examine the influence and significance of informal global governance in contemporary global politics and advance G20 scholarship past the typical observations from economic and international policy perspectives. Chapters cover various accounts of how the G20 influences world politics, the driving forces behind the G20 and the ways in which the G20 could or should be reformed in the future. International Relations theory is able to inform a better understanding of how the G20 operates and also explore potential improvements for the international forum to adapt to rapid developments in global politics.

Students and scholars of international relations, global governance, diplomacy and globalization will find this book offers a fresh and enlightening perspective on the G20.

Critical Acclaim
‘The book is most useful – and attractive – to students of IR that are interested specifically in the context and operation of the G20. But, from a teaching perspective, the book has a more general value in that it can be utilised as a tool to evaluate theories against procedural and process applications in a key case.’
– Andrew F Cooper, European Review of International Studies

‘Steven Slaughter’s book is a most welcome addition to the G20 and global governance literature. The work contains theoretically sophisticated understanding of legitimacy as applied to the premier forum of economic collective action. Although the core audience will be students focused on key concepts and practices related to 21st century summitry, the book deserves a wider audience interested in the evolution of international politics.’
– Andrew F. Cooper, University of Waterloo, Canada

4. The G20 and the English School
Tristen Naylor

5. A Constructivist Approach to the G20
Jonathan Luckhurst

6. The G20 Through the Lens of Historical Institutionalism
Lora Anne Viola

7. A Nébuleuse for a New World Order? The G20 from a neo-Gramscian Perspective
Tom Chodor

8. Feminist Approaches to Global Economic Governance: The G20 as a Platform for Step Change?
Susan Harris-Rimmer and Caitlin Byne

9. Green Theory and the G20
Kyla Tienhaara and Christian Downie

Conclusion: International Relations Theory and the Future of the G20
Steven Slaughter