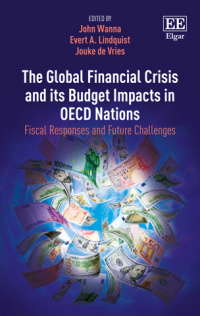 The Global Financial Crisis and its Budget Impacts in OECD Nations

9781784718954 Edward Elgar Publishing
Edited by John Wanna, Research School of Social Sciences, The Australian National University, Australia, Evert A. Lindquist, Professor, School of Public Administration, University of Victoria, Canada and Jouke de Vries, Professor of Governance and Public Policy, University of Groningen and Dean of Campus Fryslân, Leeuwarden, the Netherlands
Publication Date: 2015 ISBN: 978 1 78471 895 4 Extent: 368 pp
The global financial crisis of 2007–09 constituted the biggest shock to the economies of the OECD nations since the Second World War and caused most of their governments to move into intense crisis mode. They made significant adjustments to their fiscal policy regimes, including massive interventions to stabilize markets and economies. But how they reacted to the crisis, and what measures they took to deal with it, still underpin their economic and budgetary positions. This singular shock provides the editors and authors of this book with an intriguing opportunity to examine how different OECD budgetary systems performed. Chapters cover the EU, North America and Asia, assessing how governments responded to the challenge and how their budget systems evolved in the aftermath.

More Information
Critical Acclaim
Contributors
Contents
More Information
The global financial crisis of 2007–09 constituted the biggest shock to the economies of the OECD nations since the Second World War, testing budgetary systems and causing most of their governments to move into intense crisis mode. Policy responses by governments and international authorities included massive interventions to stabilize markets and economies, and significant adjustments to fiscal policy regimes. How governments reacted to the crisis, which was manifested differently in each jurisdiction, had significant political implications for sitting governments and led to reforms of fiscal policy and budgetary regimes, which have since continued to wrestle with slow economic growth and strained public finances.

This singular shock provides the editors and authors of this book with an intriguing opportunity to examine how different OECD budgetary systems performed. The contributions frame and assess how governments responded to the challenge and how their budget systems evolved in the aftermath, with a focus on strategy, decision-making and balancing competing demands. Chapters cover the EU, North America and Asia, including comparison between countries that fared well, those who were moderately affected and those countries massively affected by the global financial crisis.

This timely book will appeal to students and academics seeking an international understanding and analysis of the effects and consequences of the global financial crisis.
Critical Acclaim
‘This is a timely, important book for fiscal policy-makers and budget practitioners. It assesses why some advanced democracies were prepared for the global financial crisis and others were not, and how some countries responded in ways that exacerbated fiscal instability. Its dozen country cases offer highly relevant lessons for mitigating cyclical disturbances that frequently beset national budgets and for managing public finances during turbulent times. The key takeaway message is that government capacity and budget policies matter and should dispel the notion that all countries are helpless when crisis strikes.’
– Allen Schick, University of Maryland, College Park, US
Contributors
Contributors: M.G. Arghyrou, R. Boyle, S. Davidsen, T. Degen, D.M. Fantone, D.A. Good, M. Horie, L. Jensen, E. A. Lindquist, M. Mulreany, P.T. Pereira, P.L. Posner, J. de Vries, J. Wanna, L. Wemans, E. Zapico-Goñi

3. Canada’s Reactive Budget Response to the Global Financial Crisis – From Resilience and Brinkmanship to Agility and Innovation
David A. Good and Evert A. Lindquist

4. Australian and New Zealand Responses to the ‘Fiscal Tsunami’ of the Global Financial Crisis – Preparation and Precipitous Action with the Promise of Consolidation
John Wanna

7. The Global Financial Crisis in Denmark and Sweden – A Case of Management ‘Lite’
Lotte Jensen and Sysser Davidsen

11. Managing Ireland’s Budgets During the Rise and Fall of the ‘Celtic Tiger’
Richard Boyle and Michael Mulreany

12. Readiness, Resilience, Reform and Persistence of Budget Systems after the GFC – Conclusions and Implications
Evert A. Lindquist, Jouke de Vries and John Wanna