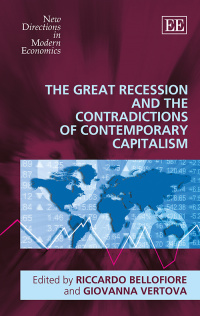 The Great Recession and the Contradictions of Contemporary Capitalism

9780857938527 Edward Elgar Publishing
New Directions in Modern Economics series
Edited by Riccardo Bellofiore, Professor of Political Economy and Giovanna Vertova, Assistant Professor of Political Economy, University of Bergamo, Italy
Publication Date: 2014 ISBN: 978 0 85793 852 7 Extent: 256 pp
The current crisis is one of the great crises punctuating the long history of capitalism, and to be properly understood it is vital to take into account its ongoing structural transformation. This book offers plural perspectives on the Great Recession, placing the analysis of finance, class and gender at the center of the debate. It begins with a comprehensive insight into the crisis, before moving on to focus on debt, asset inflation and financial fragility. Following chapters discuss global imbalances, structural monetary reform and the management of public finance, including a investigation of the Italian experience. The book concludes with novel contributions on the gender dimension of the crisis and the analogies between a nuclear and financial chain reaction.

More Information
Critical Acclaim
Contributors
Contents
More Information
The Great Recession has punctuated the long history of capitalism and is a necessary outcome of contemporary capitalism’s great contradictions, both in its Anglo-Saxon configuration and European neo-mercantilism posture. To be properly understood it is vital to take into account the ongoing structural transformation of the crisis in its multiple dimensions.

Through expert contributions, this book explores the integral role of finance, class and gender in analysing the great recession, alongside offering plural theoretical interpretations of the crisis. The Great Recession and the Contradictions of Contemporary Capitalism presents a comprehensive insight into the global crisis, focusing on debt, asset inflation and financial fragility. Key areas such as global imbalances, monetary reform and the management of public finance are examined, and a unique investigation into the Italian experience of the crisis is offered. The book concludes with novel concepts on the gender dimension of the crisis and the analogies between a nuclear and financial chain reaction. Both the financial and real aspects of this modern phenomenon are addressed in this timely book.

Academics and students of economics, international political economy, sociology and political science will benefit from the comprehensive and original perspective this book offers.

‘This book makes a difference compared with the mass of existing crisis literature. Exploring a variety of heterodox approaches, it clearly discusses the important issues behind the well known facts: the dynamics of capitalism leading to the current crisis, the character of the crisis as mainly financial or as a result of changing conditions in production and consumption, the “rationality” of money, credit and debt, and the gender perspective of the crisis. Here you can find interesting alternatives to sterile mainstream discussions.’
– Michael Heinrich, University of Technology and Economics, Germany

‘An excellent assemblage of scholarly thought on the current economic mess in Europe and America. Drawing on a range of left traditions in political economy, from Marx to Keynes to Minsky, the authors offer original takes on crisis theory, financial fragility and austerity. The book’s great strength is the depth of analysis of money, debt and speculation, and how they are implicated in the malfunctioning of contemporary capitalism. A salutatory challenge to the aridity of so much of conventional economics.’
– Richard A. Walker, University of California, US

‘The Great Recession has shaken up the economics profession, underscoring the urgency of developing new and innovative ways of understanding the changes in the global economy. This excellent and thoughtful volume offers a series of heterodox analyses that will do just that. It will prove valuable to economists ready to question neoclassical and even Keynesian assumptions about how macroeconomies function in order to develop more relevant models and policies that fit our current system.’
– Stephanie Seguino, University of Vermont, US

1. The Great Recession and the Contradictions of Contemporary Capitalism
Riccardo Bellofiore

3. Marx, Keynes and Hayek and the Great Recession of 2008
Meghnad Desai

9. The True Rules of a Good Management of Public Finance. An Implication of the Fatal Euro-zone Crisis.
Alain Parguez

10. Growth and Crisis in the Italian Economy
Vittorio Valli

11. What’s Gender got to do with the Great Recession? The Italian Case.
Giovanna Vertova