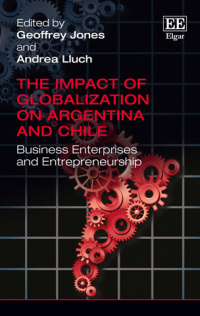 The Impact of Globalization on Argentina and Chile

9781783473632 Edward Elgar Publishing
Edited by Geoffrey Jones, Isidor Straus Professor of Business History, Harvard Business School, US and Andrea Lluch, CONICET, Argentina and Los Andes University, Colombia
Publication Date: 2015 ISBN: 978 1 78347 363 2 Extent: 304 pp
During the first global economy of the late nineteenth century and early twentieth century, Argentina became one of the richest countries on earth, while Chile was an economic backwater. During the contemporary era of globalization, liberalization and institutional reforms in Chile provided a context in which business grew, while in Argentina, institutional dysfunction made productive business hard to sustain. This book explores the complex relationships between corporate behavior, institutions and economic growth through the contrasting experiences of Argentina and Chile. In nine chapters written by prominent business historians, the work addresses the role of business in these two eras of globalization, examining the impact of multinationals, the formation of business groups, and relations between business and governments. It places the regional experience within the context of the worldwide history of globalization.

More Information
Critical Acclaim
Contributors
Contents
More Information
This unique book compares the effects of globalization on two differing Latin American countries, Argentina and Chile, while utilizing both the historical lens of the late nineteenth century and the status of the modern economy to draw its conclusions.

Focusing on these two eras of globalization, leading business historians based in Europe, Latin America, and the United States examine the impact of multinationals, the growth of business groups, and the conflicted relations between business and government. Specifically, this book provides a compelling new historical perspective on current economic and political crises in Argentina and Chile. The contributors offer a pioneering comparative study of the complex and non-linear impact of globalization,
and the evolution of business systems in the two neighboring countries. They draw on literature which had previously only been available in Spanish, setting this book apart from its competitors.

The Impact of Globalization on Argentina and Chile will be a valuable resource for economic and business historians, Latin Americanists, and management scholars who research and teach international business and globalization.

Critical Acclaim
‘This multidisciplinary collection of essays provides a comprehensive and vivid picture of the transformation of the business system in Argentina and Chile during the so-called globalisation waves in the nineteenth and twentieth century. It is indeed an important contribution to the business history literature.’
– Beatriz Rodriguez-Satizabal, Business History

‘This book offers a new window to view and to understand the two waves of globalization that have swept the world in the last century and a half. By exploring the evolution and key role of business groups and multinationals in Argentina and Chile over the long haul, it helps to explain the changing strategies of entrepreneurs and companies required to navigate the challenges of deep shifts in Latin American politics and economics from the past to the present.’
– Carlos Marichal, El Colegio de México

‘The authors of the chapters in Geoffrey Jones and Andrea Lluch's book make a unique contribution to the business history literature in their comparison of domestic and foreign business enterprises in two countries, Argentina and Chile. Their volume, which covers the period from the mid-19th century to the present, adds new riches to our understanding of how different types of businesses evolved within these neighboring nations. It prompts questions (and includes some answers) on why the differences. Students of the history of the world economy, Latin America, and Argentina and Chile will greatly enjoy this volume, finding much of interest and food for thought.’
– Mira Wilkins, Florida International University, US

5. Spanish Business in Argentina and Chile since 1880
Javier Vidal Olivares

6. Staffing and Management in British MNEs in Argentina and Chile, 1930-1970
Rory M. Miller

7. From a Guaranteeing State to an Entrepreneurial State: The Relationship between Argentina’s State and Urban Utility Companies, 1880-1955
Norma Silvana Lanciotti