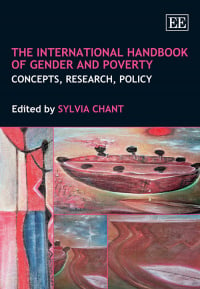 9781849800952 Edward Elgar Publishing
Edited by the late Sylvia Chant FRSA, FAcSS, formerly Professor of Development Geography, London School of Economics and Political Science, UK
Publication Date: 2011 ISBN: 978 1 84980 095 2 Extent: 736 pp
In the interests of contextualising (and nuancing) the multiple interrelations between gender and poverty, Sylvia Chant has gathered writings on diverse aspects of the subject from a range of disciplinary and professional perspectives, achieving extensive thematic as well as geographical coverage. This benchmark volume presents women’s and men’s experiences of gendered poverty with respect to a vast spectrum of intersecting issues including local to global economic transformations, family, age, ‘race’, migration, assets, paid and unpaid work, health, sexuality, human rights, and conflict and violence.