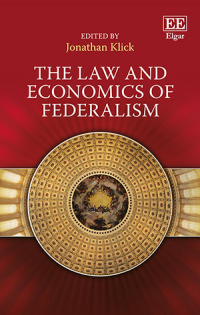 The Law and Economics of Federalism

9781849803625 Edward Elgar Publishing
Edited by Jonathan Klick, Professor of Law, University of Pennsylvania Law School US and Erasmus Chair of Empirical Legal Studies, Rotterdam, the Netherlands
Publication Date: 2017 ISBN: 978 1 84980 362 5 Extent: 288 pp
This unique volume takes a primarily empirical perspective on the law and economics of federalism. Using cross jurisdiction variation, the specially commissioned chapters examine the effects of various state experiments in areas such as crime, welfare, consumer protection, and a host of other areas. Although legal scholars have talked about states as laboratories for decades, rarely has the law and economics literature treated the topic of federalism empirically in such a systematic and useful way.

More Information
Contributors
Contents
More Information
This collection of specially commissioned chapters takes one of the oldest theoretical approaches on federalism in the law and puts it in the service of the new empirically minded law and economics. A federalist structure, at least in principle, allows for quasi-experimental examinations and evaluations of the effects of various policies that would be more difficult in unitary systems. Although legal scholars have talked about this topic for decades, rarely has the law and economics literature treated federalism empirically in such a systematic and useful way.

The Law and Economics of Federalism begins with a generalized discussion of US federalism in the environmental context and in social welfare programs. Additionally, new empirical work is provided on the effect of state regulations on entrepreneurism, consumer protection law and crime policies. Expert contributors then turn to an analysis of inter-jurisdictional arrangements on the development of Native American communities, as well as the interplay among the levels of government on budgetary issues. Lastly, the book addresses the notable dearth of empirical analysis of federalism in the EU with an illuminating analysis of the EU’s institutional background that will spur comparable empirical work in the future.

4. Do Profits Promote Pollution? The Myth of the Environmental Race to the Bottom
Robert K. Fleck and F. Andrew Hanssen

8. Federalism and the Rise of State Consumer Protection Law in the United States
Joshua D. Wright