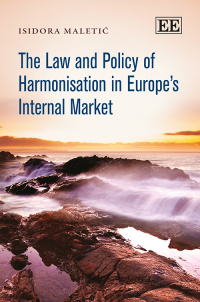 The Law and Policy of Harmonisation in Europe’s Internal Market

More Information
Critical Acclaim
Contents
More Information
This innovative book explores the constitutional compromise between the European Union’s legislative competence and member states’ regulatory autonomy, and analyses the reconciliation of economic integration and welfare protection within the European internal market. It does so through the original lens of article 114 TFEU, the law-making clause underlying the European harmonisation process.

Focusing on a critical provision and the controversial derogation mechanism contained therein, the book discusses contemporary, universally fundamental topics, such as risk assessment and related responsibility allocation within the constraints of complex legal frameworks, the preservation of regional regulatory autonomy against the background of centralised legislative norms, and the interaction of economic integration with policy interests like consumer, environmental and health protection. Highlighting the collaborative rather than adversarial value of national deviations from common European measures, the study not only complements the literature available on ‘negative integration’ of the internal market, but also challenges traditionally accepted axioms, revealing opportunities for risk prevention and legitimacy enhancement stemming from diverse European and national regulatory standards.

This detailed book will be of wide international appeal to academics, practitioners, students, judges, policy-makers and officials working within the European Union and government representatives of individual member states, as well as anyone more generally interested in the dynamics of EU integration.
Critical Acclaim
‘. . . this is a high quality book. It is a focused analysis of an important but rarely discussed issue of EU law. It is a welcome contribution by a lawyer to the discussion of positive harmonization in the internal market.’
– Jukka Snell, Yearbook of European Law

‘At times when so much attention is devoted to the constitutional architecture of the European Union via Treaty amendments or supplements in the aftermath of the Euro-crisis, the core business of European market building through harmonization is all too often neglected. It deserves strong recognition that Isidora Maletić forcefully brings Art. 114 TFEU back to the agenda. Her competent study provides new insights into the major competence rule which still forms the back bone of European Integration. The constant strive of the EU for embarking on non-trade policies against the half-hearted resistance of the Member States deserves indeed a major study, spelling out the details of the rather complex article. Her comprehensive analysis detects the amazing potential of Art. 114 TFEU as a tool to co-ordinate differences in the understanding of what might be a “high level of protection” and it allows for new ways of co-operation between the EU and the Member States. This finding, which is backed through the analysis of the ECJ case law and the notification procedure of Art. 114 TFEU fits into the overall debate on constitutional pluralism which stays away from a hierarchical understanding of the relationship between the EU legal order and the Member States.’
– Hans Micklitz, European University Institute, Italy

‘This book is essential reading for anyone seeking an up-to-date and critical understanding of the success of the European Union’s approach to market harmonisation.’
– Veerle Heyvaert, London School of Economics, UK

‘Despite all the buzz around the single currency, the heart of the EU edifice remains the internal market. Isidora Maletić’s book is an outstanding contribution of original scholarship that makes this edifice look more solid than ever. By exploring the theory and practice of the archetype legal basis for EU regulatory action, this book dispels the ubiquitous claim that national derogations from European standards are reflective of a weak integration process and convincingly argues that national regulatory differentiation may instead provide opportunities for reflexive learning and risk prevention. The law and policy of harmonisation is European internal market’s scholarship at its best and ought to be essential reading to all scholars interested in the dynamics of EU integration.’
– Alberto Alemanno, HEC Paris, France and Editor, European Journal of Risk Regulation