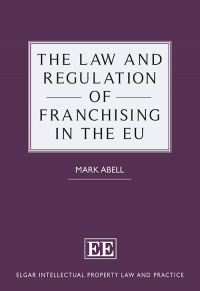 The Law and Regulation of Franchising in the EU

9781781952207 Edward Elgar Publishing
Elgar Intellectual Property Law and Practice series
Mark Abell, Partner in a law firm in the city of London, UK
Publication Date: 2013 ISBN: 978 1 78195 220 7 Extent: 372 pp
The Law and Regulation of Franchising in the EU provides an in-depth analysis of the regulatory environment for franchising in the EU. Franchising in the EU comprises nearly 10,000 franchised brands and over €215 billion (US$300 billion) turnover per annum. However, compared to its scale in the US and Australia, franchising is not realising its full potential in the EU and the author points to the lack of homogeneity across members states as a large part of the problem.

• Practical analysis from a leading authority in the field of franchising.
• Examination of the impact of both franchise specific and general commercial law upon use of franchising in the EU.
• Comparative legal analysis of the law of England, Germany, France, the US and Australia.
• Carefully constructed proposals for a franchise directive in the EU based on the vast experience of the author.
• A draft text for the proposed directive.

The book concludes by arguing for the adoption of a draft directive, and proposes a draft directive, which promotes market confidence in franchising, provides pre-contractual hygiene and imposes a mandatory taxonomy of rights and obligations.

This highly topical and comprehensive work will appeal to franchise lawyers and franchise academics as this is the first book that analyses the impact of EU and member state law upon the use of franchising in the EU.
Critical Acclaim
‘Mark Abell’s book argues that the European franchising market fails to reach its potential as it remains unregulated. He supports this by analysing the historical legal and economic basics and risk/attraction profiles of franchising to franchisors and franchisee, compares the European situation to the highly developed regulatory regimes in the USA and Australia, and moves through to proposing and drafting a new EU directive to bring greater certainty and stability to cross border franchising in the EU. Comprehensively researched and very detailed, this book is a worthy contribution to the literature on the subject.’
– Graham Cunningham, Barrister, Hardwicke
Contributors
Contents
Contents: Foreword 1. Introduction 2. Deconstructing the Contextualisation, Architecture, Rationale and Risks of Franchising 3. Does the Contractual and Regulatory Environment Support and Promote Franchising? 4. identifying a Catalyst to Re-engineer the Regulatory Environment 5. Re-engineering the Regulatory Environment for Franchising in the EU 6. Conclusion Appendices Bibliography Index
Add to Wish List
eBook for individuals
978 1 78195 235 1
From £118.40
Click here for options
eBook for library purchase
978 1 78195 235 1
View sample chapter and check access on: