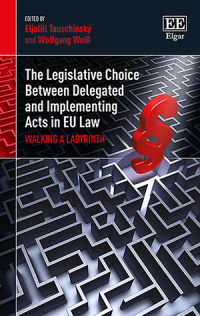 The Legislative Choice Between Delegated and Implementing Acts in EU Law

More Information
Critical Acclaim
Contributors
Contents
More Information
In the face of current confusion regarding the use of articles 290 and 291 TFEU, there is a need to further develop the theory of legislative delegation in the EU Commission. This timely book approaches this question from a practical perspective with a detailed examination of how the legislator uses delegated and implementing mandates in different fields of EU law.

Offering an analysis of legislative practice and providing concrete evidence of how articles 290 and 291 TFEU are actually handled, the expert contributors offer new insights into potential developments in EU administrative law. From this emerges a tentative categorisation that separates delegated rule-making from implementing rule-making according to the differentiation of substantive and procedural matters. However, as difficulties in the categorisation continue to remain, the book explores their systemic reasons, deeply rooted in the unclear constitutional shape of the EU.

The Legislative Choice Between Delegated and Implementing Acts in EU Law will be essential reading for law academics and course leaders as well as practitioners in national and EU administration interested in this ongoing debate central to EU administrative law.

Critical Acclaim
‘The volume offers an accurate overview of the main issues in the use of tertiary sources of law, which makes it a recommended reading for researchers, practitioners and policymakers interested in interpreting the complexity of executive rulemaking by the Commission. The volume also reaches the additional goal of contributing to the broader understanding and characterisation of EU executive rulemaking powers. It thus valuably enriches and supports the development of EU administrative law scholarship in this area.’
– Marta Simoncini, Review of European Administrative Law

‘The book is impressive due to the broad range of perspectives brought to bear on the topic. The reader will find doctrinal analyses of the topic as well as a more pragmatic, empirical examination of the legislative behaviour of Union institutions.’
– Pieter-Augustijn Van Malleghem, Common Market Law Review

‘Ever since the Lisbon Treaty introduced both delegated and implementing acts into the EU’s legal system, observers and practitioners alike have debated the nature and the implications of the choice between these different instruments. This authoritative book sheds light on the many intricacies of this “labyrinth”, making it a compelling read for anyone seeking a better understanding of delegated rule-making in the European Union.’
– Thomas Christiansen, Maastricht University, the Netherlands

‘The choice between delegated and implementing acts is one of the most important innovations brought by the Lisbon Treaty and still poses many complex constitutional questions. This book offers an insightful and provocative re-evaluation of these questions in their theoretical, jurisprudential and practical contexts; and it will, as such, be of great interest to all students of the Union’s executive law-making powers.’
– Robert Schütze, Durham University, UK and College of Europe, Bruges, Belgium

1. Delegation versus Implementation: A deconstruction of the promise of the Lisbon Treaty
Attila Vincze

2. Competition between articles 290 and 291 TFEU: what are these two articles about?
Dmitrij Zdobnõh

3. The impact of the Better Regulation policy On EU delegated and implementing acts rule-making
François Lafarge

5. Delegated and implementing acts in the regulation of pharmaceuticals – an analysis through the lens of subsidiarity
Sabrina Röttger-Wirtz

6. EU Delegation of Powers in the Field of Financial Markets Regulation
Matteo Ortino

7. Beyond Delegated and Implementing Acts: Where do EU Agencies Fit in the Article 290 and 291 Scheme?
Merijn Chamon

Instead of Conclusions – More Questions
Eljalill Tauschinsky and Wolfgang Weiß