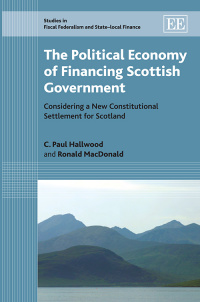 9781848440425 Edward Elgar Publishing
Studies in Fiscal Federalism and State-local Finance series
C. Paul Hallwood, University of Connecticut, US and Ronald MacDonald, Adam Smith Professor of Political Economy, University of Glasgow, UK
Publication Date: 2009 ISBN: 978 1 84844 042 5 Extent: 160 pp
Can the UK survive widespread dissatisfaction in both Scotland and England with the financing of public spending by Scotland’s parliament? This timely book explains how fiscal autonomy could raise economic growth and efficiency in Scotland – to the benefit of both Scotland and the rest of the United Kingdom. The authors discuss how other reform proposals – which amount to cutting Scotland’s block grant – would fail as they would not be seen in Scotland as legitimate. They conclude that fiscal autonomy would be accepted as it reduces Scotland’s democratic deficit in public spending, and would go a long way toward reducing vertical and horizontal imbalances in the UK.

More Information
Critical Acclaim
Contents
More Information
Fiscal autonomy could raise economic growth and efficiency in Scotland, benefiting both Scotland and the rest of the United Kingdom. C. Paul Hallwood and Ronald MacDonald discuss how other reform proposals, which amount to cutting Scotland’s block grant, would not be seen as legitimate by Scottish voters, and would be unlikely to reduce the burden on the Westminster budget.

The authors demonstrate how public finances can be organized to minimize the price of tranquillity in multi-regional states. Advances proposed in the ‘new fiscal federalism’ literature are used to explain why fiscal autonomy would be a superior system compared to the present block grant system and fiscal federalism, whereby Scotland would be granted limited tax powers. Their extensive review of recent econometric studies finds that tax devolution in other countries has been largely successful.
Critical Acclaim
‘The Barnett formula is doomed. These authors provide a readable and convincing guide to the alternatives. The volume is a wonderful example of what tight economic reasoning can do – its case for fiscal autonomy is unanswerable’.
– Professor Michael Artis, University of Swansea, UK

'Written by two economists independent of the sort of political biases that mar so much of the discussion this book offers a refreshing, analytical and authoritative economic analysis of the various paths for fiscal reform in Scotland'.
– Professor Drew Scott, The University of Edinburgh, UK

‘Hallwood and MacDonald make a compelling case for the devolution of fiscal authority to Scotland to increase fiscal autonomy and improve fiscal performance. They suggest not only the need for such devolution but provide a careful analysis and blueprint of how to do it.’
– Wallace E. Oates, University of Maryland, US
Contents
Contents: Foreword by Drew Scott Preface 1. Introduction 2. Searching for a Politically and Economically Rational Public Funding Model for Scotland 3. The Economic Case for Fiscal Devolution 4. Objectives of an Effective Fiscal Federal System 5. Fiscal Federalism: A Scottish Perspective 6. The Case for Scottish Fiscal Autonomy 7. A Restatement of the Case for Scottish Fiscal Autonomy 8. Fiscal Devolution in Some Other Countries 9. Empirical Evidence: Tax Devolution and Prosperity 10. A Separate Currency for Scotland? 11. Conclusion Bibliography Index
Add to Wish List
eBook for individuals
978 1 84844 918 3
From £25.00
Click here for options
eBook for library purchase
978 1 84844 918 3
View sample chapter and check access on:

Handbook of Cities and Networks