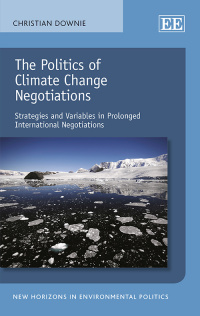 The Politics of Climate Change Negotiations

More Information
Critical Acclaim
Contents
More Information
The Politics of Climate Change Negotiations describes the successes and failures of protracted international negotiations and most importantly, examines the lessons they hold for the future.

Drawing on more than 100 interviews with climate change insiders, including former ministers, chief negotiators and presidential advisers, Christian Downie presents a rare inside account of why states agree to what they do and why they change their position in long negotiations. He also identifies eight strategies that others can use to influence the most powerful states in the world.

This book will be invaluable to academics and students working in the fields of international relations, political science, negotiation studies and global environmental politics. It will be of equal value to diplomats, policymakers and various non-governmental organizations that seek to influence international negotiations.

Critical Acclaim
‘The Politics of Climate Change Negotiations is an engrossing account of international climate change negotiations, which also makes a major theoretical contribution to the study of negotiations.’
– Larry Crump, Australian Outlook

‘Christian Downie's historical look at the negotiating behavior of the United States and the European Union during international efforts to implement a meaningful climate change treaty, go a long way toward explaining why current negotiations are bogged down. His findings about the impact of domestic politics on international negotiations should not be overlooked. The only way we will able to move to a new set of enforceable and meaningful greenhouse gas reduction commitments is to understand why past approaches have not worked.’
– Lawrence Susskind, Harvard Law School, US

‘The Politics of Climate Change Negotiations is an engrossing account of international climate change negotiations, which also makes a major theoretical contribution to the study of negotiations. Of course, the lessons are not just theoretical and one can only hope that those due to meet in Paris in 2015 heed the lessons of history.’
– Dr Larry Crump, Griffith APEC Study Centre, Griffith University, Australia

‘This is an enormously well-researched study that addresses an important hitherto-unanswered problem of negotiations. Usually single instances are analyzed but what about serial negotiations that return again and again to the subject, where the parties change position in their course? Downie tells us how this happens and in the process, enriches our understanding of negotiation. I enjoyed reading this book.’
– I. William Zartman, The Johns Hopkins University, US

‘Christian Downie has written an excellent book on the politics of prolonged international negotiations. Looking centrally at the area of climate change, Downie unpacks how and why state preferences shift over long time horizons. The book will be of interest to academics and practitioners concerned with international relations (IR) theory, comparative politics, and (most importantly) the evolution of climate negotiations.’
– Carbon and Climate Law Review