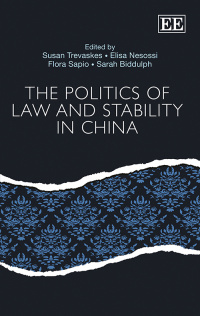 The Politics of Law and Stability in China

More Information
Critical Acclaim
Contributors
Contents
More Information
The Politics of Law and Stability in China examines the nexus between social stability and the law in contemporary China. It explores the impact of Chinese Communist Party’s (CCP) rationales for social stability on legal reforms, criminal justice operations and handling of disputes and social unrest inside and outside China’s justice agencies.

The book presents an extensive investigation into the conceptual and empirical approaches by the Party-state to the management of Chinese citizen complaint and unrest. It explores how the Party-state responds to what it sees as potentially de-stabilizing social action such as public protest, discord, deviance and criminal behaviour. This timely and important study reaches across a broad variety of areas within the legal sphere, including substantive criminal law and criminal procedure law reform, labour law, environment and land disputes, policing and surveillance, and anti-corruption drives. The central thread running through all the chapters concerns how the imperative of social stability has underpinned key Party-state approaches to social management and responses to crime, legal disputes and social unrest across the last decade in China.

This book will appeal to lawyers, political science scholars and social scientists in the area of China studies. Scholars generally interested in Chinese criminal law and criminal law procedures will also find much in this book that will be of interest to them.

Critical Acclaim
‘Valuable with insightful analysis and powerful discourse on the implications of its topics. The book makes a clear contribution to the literature on the interdependent relationship between politics and law in mainland China.’
– Siyu Liu, Criminal Law Bulletin

‘This fascinating book explores how issues of law and justice are being re-defined by China’s obsession with ‘social stability’ and how this might impact upon claims to legitimacy that the Party-state advances. A first-rate team of experts put their lens on a wide range of important areas including trial and settlement practices, administrative law, criminal justice, environmental pollution, labor relations, land ownership, policing and welfare. Each contribution offers key insights into how we should understand the effects of China’s response to increasing social discord.’
– Mike McConville, The Chinese University of Hong Kong