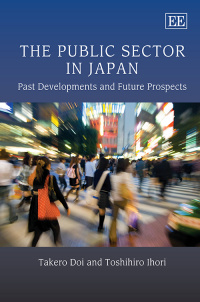 The Public Sector in Japan

Past Developments and Future Prospects

More Information
Critical Acclaim
Contents
More Information
This book provides the reader with the basis for a theoretical understanding of public-sector finance in general – and more specifically, a comprehensive, policy-oriented application of that understanding to Japanese public finance.

Particular emphasis is placed upon developing tools which can be used both theoretically and empirically to clarify essential economic concerns in Japan’s public sector. These include the macroeconomic incidence of fiscal decentralization, dependence on government bonds for covering fiscal deficits, and social security reform. In analyzing Japan’s underperforming public sector, the authors develop and recommend policy solutions aimed at achieving Japan’s growth potential, improving the quality of the public sector, and strengthening the sector’s contribution to the Japanese economy.

Guiding the reader toward an overall understanding of public-sector reforms, decentralization and fiscal policy in Japan, this book will strongly appeal to academics, students and researchers with an interest in modern public finance theory and macroeconomic analysis.
Critical Acclaim
‘. . . covers valuable ground in exploring the complex world of Japan’s public finances and public sector operations.’
– Albrecht Rothacher, ASIEN – German Journal for Politics, Economy and Culture