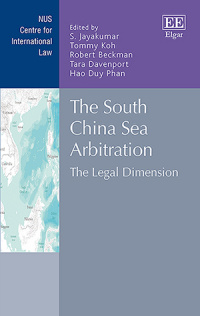 The book offers a comprehensive overview and analysis of the major issues discussed in the Arbitration including jurisdiction, procedure, maritime entitlement, and the protection of the marine environment. The chapters also explore the implications of the case for the South China Sea disputes and possible dispute settlements under the 1982 United Nations Convention on the Law of the Sea. The robust discussion in each chapter will be an invaluable contribution to the ongoing debate on the South China Sea Arbitration.

This informative and compelling book will be essential reading for scholars and students of public international law, law of the sea, international dispute settlement and international relations. Policy makers and governmental officials with responsibility for law of the sea and international dispute settlement, as well as members of international courts and tribunals, international organisations and non-governmental organisations, will find this book a stimulating read.
Critical Acclaim
‘This book is one of the most thoughtful contributions to the discussion on the arbitral awards in the South China Sea case. Addressing a case charged with political implications, it examines, with a scholarly approach, some of the most important and controversial issues raised in the Awards. Particular attention is given to the key issue of the meaning of “rocks” under Article 121 of the UN Convention on the Law of the Sea. More technical legal aspects, often left out in studies on the subject, such as the procedural ones, are also addressed. The authors are well-known specialists on the law of the sea working under the wise coordination of some of the top specialists in Singapore's research institutions.’
– Tullio Treves, Università degli Studi di Milano, Italy

‘The depth and breadth this book brings to the legal issues surrounding the South China Sea Arbitration are unmatched. The contributors explain the various aspects of the disputes (particularly those relating to the status and entitlement of the Spratly Islands’ features), analyse the implications for the cooperation in the South China Sea, and the legal ramifications for the order of the oceans established under UNCLOS. This book is thus essential reading for everyone interested in the current state of the art in a field that addresses one of the key legal developments with regard to the South China Sea.’
– Julien Chaisse, The Chinese University of Hong Kong and Advisory Board Member, Asian Academy of International Law
Contributors
Contributors: R. Beckman, T. Davenport, E. Franckx, L.Q. Hung, S. Jayakumar, S. Kaye, T. Koh, Y. Lyons, M.H. Nordquist, N. Oral, H.D. Phan, J.A. Roach, C.R. Symmons, P. Tkalich
Contents
Contents:

Part II Maritime Entitlements
5. Historic Rights in the Light of the Award in the South China Sea Arbitration: What Remains of the Doctrine Now?
Clive R Symmons

7. The Arbitral Tribunal’s Interpretation of Paragraph 3 in Article 121: A First But Important Step Forward
Erik Franckx

9. Artificial Islands in the South China Sea: The Legal Regime and Implications of the Award
J Ashley Roach

11. Rocks Versus Islands: Implications for Protection of the Marine Environment
J Ashley Roach