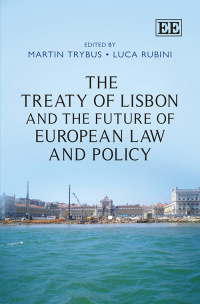 Divided into six parts, the 23 chapters provide ‘after Lisbon’ perspectives on law and governance of the EU, its powers and nature, the Charter of Fundamental Rights, EU external action and policy, justice and criminal policy, and economic governance. The authors, drawn from eleven EU Member States, offer a uniquely diverse and extensive coverage of the new EU law and policy after Lisbon. The book argues that while the Treaty of Lisbon has to be considered a milestone in the history of European integration, its shortcomings and open questions will make a future major treaty inevitable.

The Treaty of Lisbon and the Future of European Law and Policy will appeal to postgraduate students and academics in European law and policy, EU institutions, diplomatic missions, lobbying, NGOs, specialised lawyers and governments.
Critical Acclaim
‘. . . this book is a mine of considered, diverse, learned and often contrary and controversial insights and opinions from leading experts in European law and policy. . . For EU lawyers and researchers into the complexities of the Treaty of Lisbon, this extensively footnoted book offers interesting background perspectives and should be considered a must-have acquisition, especially with its abundance of research materials.’
– Phillip Taylor MBE and Elizabeth Taylor, The Barrister Magazine

‘All in all, the book provides a very insightful and critical account of many of the changes introduced by the Lisbon Treaty. The chapters are well written, highly readable and of great help for even specialised readers to understand some of the complexities resulting from the Lisbon Treaty.’
– Nathan Cambien, European Law Review

‘After Lisbon the EU has reached a new precarious stage in its development. New institutions have been created and policies reformed. The different chapters of this book cover the most important innovations, while providing a fresh critical assessment of the shortcomings of the present arrangements. Works are always in progress at the EU site and the authors provide the future architects of this grand building as well as the academic community with much food for thought.’
– Roberto Caranta, University of Turin, Italy

Preface: The European Union and the Rule of Law
Gisela Stuart

Introduction: After the Treaty is Before the Treaty
Martin Trybus, Luca Rubini, and the authors

PART I: LAW AND GOVERNANCE IN THE EUROPEAN UNION
1. Who Leads the EU? Competences, Rivalry and a Role for the President of the European Council, the High Representative
Michael Mirschberger

2. The European Court of Justice after Lisbon
Anthony Arnull

4. The Pressures Inflicted by the Financial Crisis on the Euro Area: De Facto Creating an EU ‘Economic Government’ Despite the Status Quo Maintained in the Lisbon Treaty?
Laura Puccio

5. Tracing the Development of Administrative Principles in the EU: A Possible New Approach to Legitimacy?
Melanie Smith

PART II: THE POWERS AND NATURE OF THE EUROPEAN UNION
6. The European Union as a Staatenverbund? The Endorsement of the Principle of Conferral in the Treaty of Lisbon
Barbara Guastaferro

7. A Jagged-edged Jigsaw: The Boundaries of Constitutional Differentiation and Irish-British-Euro Relations after the Treaty of Lisbon
Elaine Fahey

9. The Substance of Subsidiarity: The Interpretation and Meaning of the Principle after Lisbon
Ton van den Brink

11. The Charter of Fundamental Rights in the Treaty on European Union
Martin Borowski

PART IV: EXTERNAL ACTION AND POLICY
13. The External Action of the European Union under the Treaty of Lisbon
Urfan Khaliq

16. Towards a Common Defence? Legal Foundations after the Lisbon Treaty
Erkki Aalto

PART V: JUSTICE AND CRIMINAL POLICY
17. Delegation and Accountability of Criminal Agencies after Lisbon: An Examination of Europol
Bleddyn Davies

18. Options for the Development of European Criminal Law under the Treaty of Lisbon
Flora Goudappel

19. The EU Immigration and Asylum Policy in the Post-Lisbon Institutional Context
Marie-Laure Basilien-Gainche

21. Changing the Competition Regime Without Altering the Treaty’s Chapter on Competition?
Julian Nowag

23. The Future of Employment Law and Policy after Lisbon: The Rise of Solidarity Rights?
Lisa Rodgers