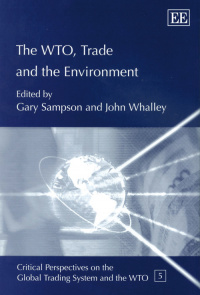 The WTO, Trade and the Environment

There is a natural linkage between trade and environment through the use of policy instruments. But when does more trade help or hurt the environment? There is clash between the market-opening principles of free trade, as reflected in the WTO, and the environmental quality and market regulating instincts of environmentalists. This volume examines the conceptual issues involved, as well as the manner in which the subject has been handled by the WTO. It will be an invaluable source of reference for students and researchers alike.
Critical Acclaim
‘Trade and environment is a topic on which people hold strong opinions, often based on fundamental misunderstandings. The editors of this volume – both distinguished experts on the subject – have collected an impressive group of papers that provide a framework for improved dialogue. These cover the basic principles, empirical tests of key hypotheses, and evaluations of the most important institutions, drawing from the disciplines of both economics and international law. A welcome resource.’
– Scott Barrett, Johns Hopkins University, US

‘Of all the issues to have risen up the global agenda in recent years, the link between trade and the environment is the most debated. Debates need sound science and good information. This book provides both. It is an excellent compilation of the salient contributions to this important topic.’
– The late David Pearce, formerly of University College London, UK