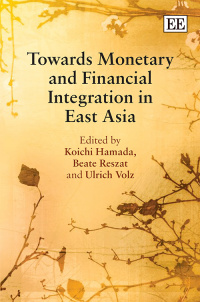 Towards Monetary and Financial Integration in East Asia

With contributions from distinguished experts this timely book evaluates the economic and politico-economic arguments and conditions for monetary and financial integration in East Asia. It explores how and to what extent the countries of the region can integrate despite their heterogeneity and their underlying political tensions. Drawing on the European experiences, this book analyzes the economic logic of monetary and financial integration in East Asia and its political feasibility.

This invaluable broad analysis will be of interest to academic researchers, students, policy-makers and professional economists working on matters of international economic cooperation, common currency areas, international open economy macroeconomics, and East Asian integration.
Critical Acclaim
‘Towards Monetary and Financial Integration in East Asia is an important book. East Asia, led by China, has been and will continue to be the largest, most rapidly growing region in the world. Major global imbalances persist, with East Asia in large surplus. Yet East Asian financial and monetary integration is only in the early stages of what will necessarily be a long-run process. These 14 essays by different authors address, in six Parts, fundamental long-run issues and prospects. These include the development of a regional financial architecture, liquidity provision and crisis management, surveillance mechanisms, exchange rate arrangements, currency baskets, an Asian Currency Unit, and ultimately even a single currency. The implications of the rise of China and the role of Japan underlie much of these analyses. However imperfect, the EU is the dominant relevant experience for East Asian financial and monetary integration. It is important to understand, as the authors do, that it took 47 years from the EU’s nascent founding to the establishment of the euro, and that economic integration has preceded political integration. This book importantly addresses such basic issues in this time frame and with an appreciation of the political economy difficulties of financial integration.’
– Hugh Patrick, Columbia University, US

PART I: THE POLITICAL ECONOMY OF REGIONAL INTEGRATION
1. The ASEAN Economic Community and the European Experience
Michael G. Plummer and Reid W. Click

12. The Role of an Asian Currency Unit
Masahiro Kawai

PART VI: THE ROLE OF CHINA
13. The Illusion of Precision and the Role of the Renminbi in Regional Integration
Yin-Wong Cheung, Menzie D. Chinn and Eiji Fujii