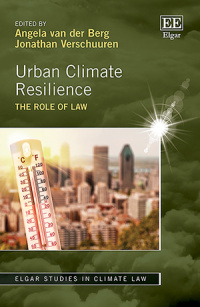 More Information
Critical Acclaim
Contributors
More Information
This significant book addresses the most important legal issues that cities face when attempting to adapt to the changing climate. This includes how to become more resilient against the impacts of climate change such as the sea level rise, increases in the intensity and frequency of storms, floods, droughts, and extreme temperatures.

A range of expert contributors are brought together to assess the current state of climate change law and policy at the city level, featuring analysis of key legal instruments that can help urban societies adapt to, and cope with, the changing climate. Chapters contain comparative assessments of urban climate change policies in cities across the world, in both developed and developing countries, including Ghana, South Africa, Indonesia, the Netherlands and the US. Additionally, the book analyses legal approaches, relying on planning law and other legal instruments in the hands of city governments, which can aid in combating specific problems such as the urban heat island effect.