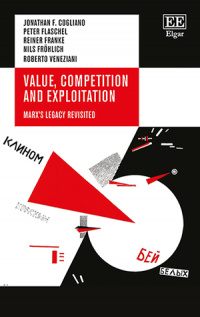 More Information
Critical Acclaim
Contents
More Information
The 2008 financial crisis presented the opportunity to overturn and rethink much of the stale or misguided parts of economic theory and, in so doing, build a rich and empirically meaningful social science. This never happened. By reconsidering the classical-Marxian tradition using modern tools of economic analysis, this book offers an alternative to the mainstream understanding of notions of value, price, and competition, concepts which serve as the foundation for a theoretically and empirically robust economic theory.

Providing a unique synthesis of modern input-output analysis and classical political economics, this book combines current economic theory with historical economic thought. In this way, Value, Competition and Exploitation offers a deeper and more nuanced understanding of today’s economic problems than can be gained through mainstream approaches. With a rigorous and empirically informed approach to classical theories of value and price, this book demonstrates that Marx’s labor theory of value remains a valuable tool in understanding the structure and dynamics of capitalist economies.

Written in an accessible style and presented with a clear structure, this book will be invaluable to economics students of all levels. The topics analyzed will also be of interest to scholars of classical and Marxian economics, as well as scholars of economics more widely.

Critical Acclaim
‘This is a very important book, which belongs in every serious university library.’
– J.E. King, History of Political Economy

‘Value, Competition and Exploitation provides an excellent overview of the state of contemporary Marxian political economy.’
– Marx and Philosophy

‘Mainstream economists have a tendency to regard classical and Marxian economics as an uninteresting and irrelevant means to understand and explain current economic reality. This book, with its extensive and detailed argument, convincingly dispels that view. It shows how classical and Marxian value theory (with the latter built on the former) provides insight into modern capitalist economies. In doing so, it provides an excellent source for any non-Marxian to learn about the Marxian labor theory of value.’
– Donald W. Katzner, University of Massachusetts, Amherst, US

‘Economics has been searching for a new paradigm to understand the world around us. The Great Moderation failed. Now comes the most innovative response to the challenge of constructing that new paradigm. The authors reinvent the classical and Marxian paradigm, give it a rigorous mathematical structure, and demonstrate its effective superiority to the Walrasian alternative. The outstanding merit of this book is that it is able to relate the theoretical structure to contemporary data for the German economy. There are fruitful insights on productivity growth, technical progress, and profitability. This book will be a great asset to teachers, research students, and the next generation of budding economists.’
– Lord Meghnad Desai, London School of Economics, UK

‘This innovative book elucidates a foundation for applying the Marxian labor theory of value to the modern economy. Drawing on ideas of one of the authors (Peter Flaschel of the Bielefeld School of Economics), it both explicates precursors of Marx’s work starting with Quesnay and brings it up to date in light of arguments made by Okishio, Steedman, Foley, and others about such controversies as the transformation problem.’
– J. Barkley Rosser Jr., James Madison University, US