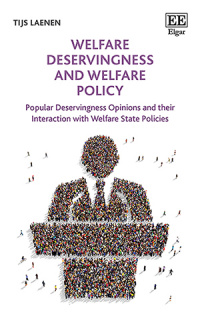 Popular Deservingness Opinions and their Interaction with Welfare State Policies

9781839101885 Edward Elgar Publishing
Tijs Laenen, Postdoctoral Researcher, Centre for Sociological Research, KU Leuven, Belgium
Publication Date: 2020 ISBN: 978 1 83910 188 5 Extent: 272 pp
This important book builds a bridge between the literature on popular welfare deservingness and social welfare policies. It examines the relationship between the two, exploring the close correspondence between public opinion and public policy that has been present throughout the history of social welfare.

Using a combination of qualitative and quantitative data in a mixed-methods approach, Tijs Laenen not only investigates popular attitudes towards some of the most contested and ‘least-deserving’ policy target groups, but also towards groups alleged to be highly deserving of social welfare. The chapters also examine how deservingness opinions relate to public support for the social obligations of welfare recipients, for example job-seeking requirements for the unemployed, which has often been overlooked in the field.

Valuable insights are offered into the relationship between welfare deservingness and policy on a cross-national basis, making this a valuable read for sociology, political science and social policy scholars seeking a more in-depth understanding of cross-national differences in welfare policies and welfare attitudes. Policy makers and administrators will also find the study of both the macro-level of welfare regimes and the meso-level of welfare schemes useful.

Critical Acclaim
‘Welfare states are not just “cold arrangements”, but rely on solidaristic commitments of citizens. Tijs Laenen (and chapter coauthors) makes a fresh and empirically sound contribution to the issue, “who deserves what” based on the framework of deservingness. The strengths of the book lie not only in the conceptual comprehensiveness, but in the insightful and well-crafted combination of quantitative and qualitative data.’
– Steffen Mau, Humboldt University zu Berlin, Germany