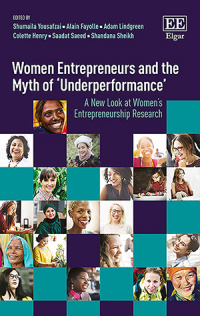 Women Entrepreneurs and the Myth of ‘Underperformance’

Significantly, this book adds a critical perspective to defining ‘success’ and ‘performance’, shattering misconceptions of underperformance in women-owned enterprises. The contributing authors raise questions on the limiting concept of the ‘entrepreneur’ and have valuable insights into policies to facilitate female entrepreneurs. Instead of taking a one-sided and narrow approach with regards to understanding the entrepreneurship performance phenomenon, this book argues that future researchers should take a fresh look at business performance, considering structural constraints, definitions of success and other socio-political factors.

Scholars in the fields of entrepreneurship, gender studies, and institutional theory, as well as those who have a general interest in critical research, will benefit from this progressive step in entrepreneurship research.
Critical Acclaim
‘A must read for all entrepreneurship scholars because it helps us to understand and appreciate the real and many roles of women entrepreneurs, their relevance and importance to societies across the World, as well as the challenges and issues women entrepreneurs can face. An exciting and interesting read which presents us with critical questions for the future – thank you.’
– Sarah Jack, Lancaster University Management School, UK

‘To date performance of businesses started and run by women has been dominated by objective, economic metrics which in comparisons of men and women, may show that women under-perform. This book argues that this perspective is one-sided and narrow with regards to understanding the entrepreneurship phenomenon. Instead, the authors take a fresh look at business performance, considering structural constraints, definitions of success and other socio-political factors that help us to understand success and value creation of women entrepreneurs, and lead us in new research directions.’
– Candida Brush, Babson College, US

‘This book adds a critical perspective on “success”, shattering misconceptions on underperformance of women-owned enterprises. Incorporating valuable insights on policies to overcome constrained performance and facilitate female entrepreneurs, and raising questions on the limiting concept of “entrepreneur”, it represents a big step forward in the research agenda on female entrepreneurs. It is a highly relevant and recommended volume not only for all those with interest in women’s entrepreneurial activity but also the general field of entrepreneurship.’
– Anne de Bruin, Massey University, New Zealand

3. Stepping into power: Women leaders and their journey of self-redefinition
Milka Milliance

5. Indigenous entrepreneurship: Māori female entrepreneurs in the tourism industry and constraints to their success
Alina Zapalska and Dallas Brozik

14. Still bringing up the rear: Why women will always be ‘Other’ in entrepreneurship’s masculine instrumental discourse
Joan Lockyer, Cherisse Hoyte, and Sunita Dewitt