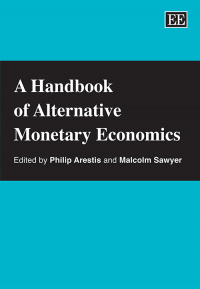 A Handbook of Alternative Monetary Economics

There are many themes and facets of alternative monetary and financial economics but two major ones can be identified.

There are many themes and facets of alternative monetary and financial economics but two major ones can be identified. The first concerns the nature of money: money is credit created through the financial system in the process of loan creation. The second theme is that money is endogenous and not exogenous. Contributions to the Handbook cover the origins and nature of money, detailed analyses of endogenous money, surveys of empirical work on endogenous money and the nature of monetary policy when money is endogenous. The second theme focuses on the financial system, and the perception that it is generally subject to volatility, instability and crisis. This Handbook will undoubtedly serve as the ultimate guide to the full spectrum of alternative monetary economics.

Philip Arestis and Malcolm Sawyer have performed an invaluable task in compiling a comprehensive Handbook, written by leading specialists, that will be required reading by upper level undergraduate and postgraduate students studying money, finance and macroeconomics as well as heterodox and monetary economists more generally.
Critical Acclaim
‘This Handbook covers a wide variety of issues of money and finance from a heterodox perspective and it proves that very convincing work is going on beyond mainstream economics. . . Arestis and Sawyer have done a marvellous job bringing together all these contributions, and I can highly recommend this Handbook to students and researchers in the area of money, finance and macroeconomics.’
– Eckhard Hein, Intervention

5. Chartalism and the Tax-Driven Approach to Money
Pavlina R. Tcherneva

15. Monetary Policy in an Endogenous Money Economy
Thomas I. Palley

18. The Role of Banks in the Context of Economic Development with Reference to South Korea and India
Santonu Basu

21. Financial Liberalization and the Relationship Between Finance and Growth
Philip Arestis

24. A Post-Keynesian Analysis Financial Crisis in the Developing World and Directions for Reform
Ilene Grabel