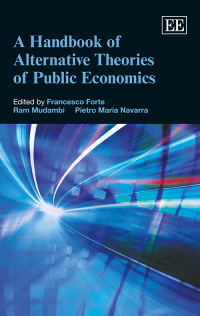 A Handbook of Alternative Theories of Public Economics

9781781004708 Edward Elgar Publishing
Edited by Francesco Forte, Emeritus Professor of Public Economics, Department of Economics and Law, Sapienza – University of Rome, Italy, Ram Mudambi, Professor and Perelman Senior Research Fellow of Strategic Management, Department of Strategic Management, Fox School of Business, Temple University, US and Pietro Maria Navarra, Professor of Economics of the Public Sector and Chancellor, University of Messina, Italy and Visiting Professor of Economics and Philosophy at the University of Pennsylvania, US
Publication Date: 2014 ISBN: 978 1 78100 470 8 Extent: 576 pp
This comprehensive and thought-provoking Handbook reviews public sector economics from pluralist perspectives that either complement or reach beyond mainstream views. The book takes a comprehensive interdisciplinary approach, drawing on economic elements in the fields of philosophy, sociology, psychology, history and law.

The book takes a comprehensive interdisciplinary approach, drawing on economic elements in the fields of philosophy, sociology, psychology, history and law. The expert contributors present new methodological approaches across these disciplines in five distinct sections:

Academics, researchers and students with an interest in economics – particularly public sector economics and Austrian economics – and public policy will find this Handbook to be an invaluable reference tool.
Critical Acclaim
'A Handbook of Alternative Theories of Public Economics edited by Francesco Forte with co-editors seeks to rejuvenate public economics by examining the relevance of schools of economics which compete with the current mainstream. The approaches of public choice, Austrian, Marxian, supply side economics, and new institutional schools are contrasted to the neo-Keynesians and the new political economics. The Handbook highlights features of these schools and points out their long neglected importance in understanding the political economy of the public sector. The Handbook is an insightful, unconventional and imaginative book well worth reading by public choice experts, public sector analysts and practitioners.'
– Gordon Tullock, formerly of George Mason University School of Law, US

‘A Handbook of Alternative Theories of Public Economics is especially welcome because it gathers studies on the problems of public economics from widely different angles. Long gone is the time when it was enough to study Musgrave to be up to date in the economics of government and social welfare. The field is now hotly disputed, so that this Handbook will prove informative about parts of the literature of which the specialist may be unaware. Prof. Forte, the principal editor, is co-author of four empirical studies on questions of the size, the finance and some particular effects of government. One of these is within a section on "Public bads" that includes articles on corruption and the informal economy not usually found in texts on public economics. There are essays extending the research programme of the Austrian School on the State to cycle theory and the euro. No less interesting are the articles on government failure. For me the collection has proved especially interesting for the number of essays on justice, fairness, utility and rationality: it is very convenient to have the different approaches to these contentious questions treated with no attempt to paper over the cracks.’
– Pedro Schwartz, San Pablo University, Madrid, Spain

‘Economics has a very strong paradigm, grounded in rational choice behavior and concepts of equilibrium in markets. But it has its weaknesses. These were never more apparent than in recent years after the failure to predict, or even understand the financial crisis of 2007-8 and the subsequent crisis of the euro. Exactly what these weaknesses are is of course the subject of much debate. But the crisis and the associated failures of the dominant paradigm have had at least one salutary side effect, of providing room for other ways of thinking to come forward and to be heard. This volume focuses on alternative approaches to public economics. It surveys a number of alternative approaches, and also provides some unusual perspectives. It includes contributions by well known economists such as Giorgio Brosio and Pierre Salmon, and a chapter by Coco and Fedeli employing a Marxian economic approach to public economics. Some of the chapters are very novel, including two chapters on cognitive dissonance and one on the role of memory in modeling cycles of extreme events. There are also chapters on Austrian economics. And there is a welcome discussion of economic approaches to religion and values, including a chapter on religion by the distinguished economist Dennis Mueller, and contributions on the role of values and ethics in politics and public economics. All in all, the book provides a most welcome sourcebook of new and sometimes very different ways of thinking about public economics.’
– Ronald Wintrobe, Western University, Canada
Contributors
Contributors: F. Acacia, J. Alm, G. Brady, G. Brosio, M. Caputo, M. Casson, G. Coco, M. Cubel Sanchez, S. Fedeli, M. Florio, F. Forte, N. Goldschmit, A. Habisch, M. Holler, J. Huerta de Soto, J.P. Jimenez, A. Koziashvili, M.A. Leroch, C. Magazzino, M. Mantovani, D. Montolio, R. Mudami, D.C. Mueller, S. Nitzan, D.M.A. Patti, P. Salin, P. Salmon, F. Sobbrio, V. Tanzi, Y. Tobol, B.A. Wickström, R. Zanola
Contents
Contents:

PART I: REVISITING THE THEORETICAL FOUNDATIONS
1. The Neglected Importance of the Austrian Thought in Public Economics
Pascal Salin

2. In Defense of the Euro: An Austrian Perspective
Jesús Huerta de Soto

12. Expanding the Theory of Tax Compliance from Individual to Group Motivations
James Alm

20. The Norm of Profits Extraction from Corruption by Bureaucracy and Market Size
Arkadi Koziashvili, Shmuel Nitzan and Jossef Tobol

21. Alternative Views on the Origins and Impact of the Informal Economy
Giorgio Brosio, Juan Pablo Jimenez and Roberto Zanola