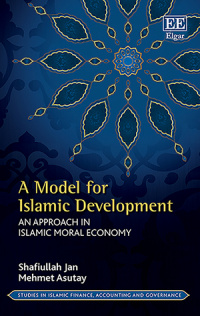 A Model for Islamic Development

An Approach in Islamic Moral Economy

9781788116725 Edward Elgar Publishing
Studies in Islamic Finance, Accounting and Governance series
Shafiullah Jan, Assistant Professor, Institute of Management Sciences and Centre of Excellence in Islamic Finance, Peshawar, Pakistan and Mehmet Asutay, Chair in Middle Eastern and Islamic Political Economy and Finance and Director, Durham Centre for Islamic Economics and Finance, Durham University Business School, UK
Publication Date: 2019 ISBN: 978 1 78811 672 5 Extent: 240 pp
This book aims to explore and analyse Islamic Moral Economy (IME) as an alternative economic and social system to capitalism and socialism. It proposes a new model of Islamic development, integrating global development within an Islamic framework of spiritual development. It is argued that the failure of Muslim countries to provide basic necessities and an environment free of oppression and injustice can be overcome with this authentic Islamic development framework. In addition, this book can be an important study to identify the theological, political, social and economic boundaries for changing the society to produce IME oriented developmentalism.

Shafiullah Jan and Mehmet Asutay argue that the observed development failures of Muslim countries to provide basic necessities and an environment free of oppression and injustice can be overcome with an authentic Islamic development framework and its corresponding value system explored in the book, rather than the existing Eurocentric theory and policy making. In addition, it identifies the theological, political, social and economic boundaries for changing society to produce IME oriented development. Utilising a novel approach to development in Islam, through its substantive ethical and moral framework, the authors critically examine and evaluate the progress of Islamic banking and finance institutions in relation to its aspirations as identified by IME.

Advanced Islamic economics and finance scholars will find this a useful source as it explores the intersection between Islamic development and the moral economy. The book will also be a valuable reference for those seeking to align public policies with ethical and moral Islamic frameworks.
Critical Acclaim
‘This book aims at proposing a development paradigm of Islam through constituting its micro foundational form. In doing so, it also evaluates the performance of Islamic banks in relation to the development objectives.’
– M. Kabir Hassan, University of New Orleans, US

‘Though some commentators may say Islam is inimical to development, even Western economists are now becoming convinced that Islam is a positive force for development. The authors have made an important addition to the literature on this contested topic. They demonstrate how the concept of moral economy can become a new paradigm that the world has been looking for since the 2008 global economic crisis.’
– M. Fahim Khan, Markfield Institute of Higher Education, UK
Contents
Contents: Introduction 2. Critical Reflections On The Development In The Muslim World 3. Islamic Moral Economy And Development 4. Justice And Development Within Islamic Paradigm 5. A Critical Evaluation Of The Social And Economic Development Performance Of Islamic Banks 6. Conceptualising The Islamic Development Process 7. Conclusion Index
Add to Wish List
eBook for individuals
978 1 78811 673 2
From $40.00
Click here for options
eBook for library purchase
978 1 78811 673 2
View sample chapter and check access on: