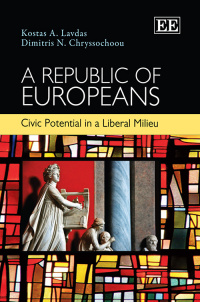 A Republic of Europeans

Civic Potential in a Liberal Milieu

More Information
Critical Acclaim
Contents
More Information
A Republic of Europeans looks at the changing routes and conditions of the European polity from a liberal republican angle, proposing an innovative regulative ideal for Europe’s future.

The book assesses the prospects for uniting diverse publics into a composite polity with its own sense of ‘demos-hood’. It also places Europe’s normative evolution in the wider context of an ordered global plurality made up of highly interrelated actors. In examining whether the European Union has reached a point which might be telling of an end state, the book offers a depiction of the whole as an ‘organized synarchy’ of entwined sovereignties, arguing that the envisaged transition from a synarchy of co-sovereigns to a self-identifying citizenry requires the constitution of a ‘Republic of Europeans’. A polity which, corresponding to the liberal republican vision of ‘many peoples, one demos’, regulates contemporary forms of pluralism, which the authors approach as instances of a ‘civic polyculturalism’.

Offering new understandings on Europe’s normative evolution, this book will appeal to undergraduate and postgraduate students in politics, Government, European studies, international relations, international organization and political theory. Doctoral students, postdoctoral and advanced researchers, as well as policy-makers in government and international organizations, will also find much to interest them in this book.
Critical Acclaim
‘A Republic of Europeans builds on an analysis of the European Union as part of the more general process of globalizing governance, but what is distinctive about the book is its imaginative defence of a liberal form of republicanism as the normative answer to the EU’s legitimacy deficit. Lavdas’ and Chryssochoou’s republicanism is pragmatic in its analysis of the EU’s institutional structure and political conditions, but civic in inspiration. It assumes that the EU is still a collection of demoi, but it suggests that a European demos can be built and sustained through democratic politics and a republican culture based on civic engagement and the principle of non-domination. This is a new and insightful addition to the growing republican literature on the EU.’
– Dario Castiglione, University of Exeter, UK

‘This book is an essential read for anyone concerned about relationships between individuals and authority in the evolving European Union. It is full of insight and persuasively original, and brilliantly relates developments in the European polity to those at the global level.’
– Paul Taylor, London School of Economics and Political Science, UK

‘A Republic of Europeans looks at the institutions of the European Union in the search for an image that is fit to regulate the aspirations of member states and member subjects. It grounds this search in an informed account of how those institutions actually operate and it relies on the framework of ideas deriving from the European republican tradition to provide guidance for the project. The book gives us a regulative ideal for the development of the Union that ought to command the attention of citizens and policymakers alike.’
– Philip Pettit, Princeton University, US
Contents
Contents: Preface 1. The Global Plurality 2. Retheorizing Europe 3. ‘One Great Republic’? 4. Reflective Projections 5. Postscript: Directions References Index
Add to Wish List