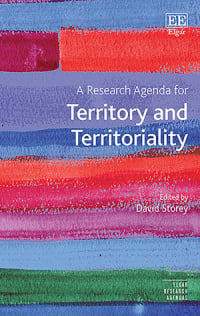 9781788112802 Edward Elgar Publishing
Elgar Research Agendas
Edited by David Storey, University of Worcester, UK
Publication Date: 2020 ISBN: 978 1 78811 280 2 Extent: 224 pp
This innovative Research Agenda draws together discussions on the conceptualization of territory and the ways in which territory and territorial practices are intimately bound with issues of power and control. Expert contributors provide a critical assessment of key areas of scholarship on territory and territoriality across a wide range of spatial scales and with examples drawn from the global landscape.

After an introduction to shifting ideas of territory, territoriality and sovereignty, the book deals with territory in its more traditional macro-scale sense at the level of the nation-state before going on to explore questions of territory, identity and belonging at a more micro-scale focusing on issues of citizenship, inclusion and exclusion.

A Research Agenda for Territory and Territoriality will be a key resource for scholars and students in geopolitics and social and cultural geography, whilst also being a thought-provoking read for those interested in nations and nationalism, sovereignty, conflict, citizenship, and territory, place and locality.

Critical Acclaim
‘This terrific book demolishes the false but commonly held assumption that territory is merely the inert stage on which the real political or sociological action of life takes place. Its sophisticated analysis of fascinating and wide-ranging examples demonstrates that far from being a passive platform, territory is an active and contested element in so many of the dramas of our age. We forget this at our peril.’
– Nick Megoran, Newcastle University, UK

‘With wonderfully illustrative case studies, David Storey and colleagues bring us on an engaging intellectual journey. They broaden our critical reading of territory and territoriality, connecting to and extending a range of important debates in political and cultural geography, from nationalism and biopolitics, to sovereignty and violence. With the emergence of the Black Lives Matter movement, the book feels even more important as contributors bring nuanced perspectives to the territorial strategies and socio-political conditioning of citizenship, belonging and exclusion.’
– John Morrissey, National University of Ireland, Galway, Ireland
Contributors
Contributors: J. Agnew, N. Cunningham, S. Evans, N. Harmer, A.B. Murphy, A.Passi, D. Storey, A. Trauger, R. Yarwood