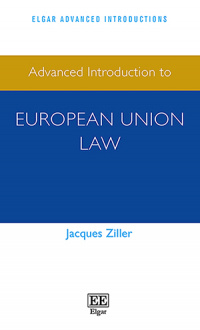 9781788119559 Edward Elgar Publishing
Elgar Advanced Introductions series
Jacques Ziller, Professor of European Union Law, University of Pavia, Italy and formerly of the European University Institute, Florence, Italy and the Université de Paris 1 – Panthéon-Sorbonne, France
Publication Date: 2020 ISBN: 978 1 78811 955 9 Extent: 144 pp
This book explains how member states of the EU confer powers to the Union through the founding treaties and the legal frame applicable to the Union’s institutions, and the rules that apply to their functioning and the legal review of their action. It reviews the main fields of action of the EU – the internal market, area of freedom, security and justice, external action – and how law is shaping them. The interaction between the EU and its member states is also explained.