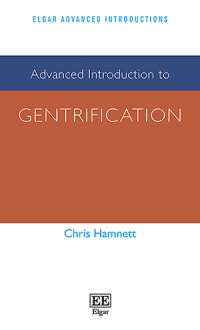 More Information
Critical Acclaim
Contributors
Contents
More Information
Elgar Advanced Introductions are stimulating and thoughtful introductions to major fields in the social sciences, business and law, expertly written by the world’s leading scholars. Designed to be accessible yet rigorous, they offer concise and lucid surveys of the substantive and policy issues associated with discrete subject areas.

• A detailed examination of both contemporary and historical sources

• Exploration of the history, geography and development of gentrification and some of its more recent forms

Composed of succinct but highly informative chapters, this engaging Advanced Introduction will prove to be an essential read for urban geography, urban studies and planning students as well as scholars with a particular interest in urban sociology and social policy.

Critical Acclaim
‘In this book, Chris Hamnett, a key figure in gentrification studies, offers a succinct yet sophisticated overview of this classical topic which abounds with heated debates and lasting vitality. Situating gentrification in wider urban processes, Hamnett aptly engages with the long-running debates on its causes and explanations, evolution and demographic changes, socio-spatial implications and future trends, with a historical perspective and global outlook. This book is an insightful read for anyone interested in gentrification and broader urban transformations.’
– Shenjing He, The University of Hong Kong, China

‘Chris Hamnett, a world authority on gentrification, masterfully illuminates the history and geography of gentrification research. This remarkable book is a lucid introduction to this classic topic as well as an advanced and insightful reflection on cutting-edge issues, heated debates and the future agenda.’
– Fulong Wu, University College London, UK

‘Hamnett’s book on gentrification clarifies and contextualizes a complex, long-lasting and animated debate in academia and beyond. Gentrification will most probably continue to reshape cities in favor of those who can afford its impact and against those who cannot. Is the significance and the global reach of gentrification growing and is its social imprint and spatial form changing? Robust and clear arguments make this book an essential read for urban scholars and students and for anyone interested in the social dimensions of cities.’
– Thomas Maloutas, Emeritus Professor of Social Geography, Harokopio University, Greece

‘Chris Hamnett has long been a central figure in the development of gentrification research. Here he provides a magisterial and lucid overview of a literature that continues to address vital problems for urban scholarship and social policy. That this small book can cover so much of this territory is a tribute to Hamnett’s informed judgment of empirical trends, conceptual arguments and policy consequences.’
– David Ley, Professor Emeritus of Geography, University of British Columbia, Canada

‘Building on a lifetime experience and study of gentrification, Chris Hamnett has written an authoritative and comprehensive Advanced Introduction to Gentrification. This compelling text covers the essential elements of the widening process of gentrification and related urban social class transformation debates. Both “time” and “space” variations of gentrification and changing meanings of the concept receive ample attention while theories, causes and effects are critically addressed as well. This book is essential reading for all who are involved in gentrification.’
– Sako Musterd, University of Amsterdam, the Netherlands

Contributors
Exploration of the history, geography and development of gentrification and some of its more recent forms