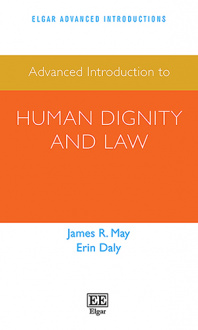 9781789901689 Edward Elgar Publishing
Elgar Advanced Introductions series
James R. May, Distinguished Professor of Law, Widener University Delaware, US and President, Dignity Rights International and Erin Daly, Professor of Law, Widener University Delaware Law School, US and Executive Director, Dignity Rights International
Publication Date: 2020 ISBN: 978 1 78990 168 9 Extent: 160 pp
This thought-provoking introduction provides an incisive overview of dignity law, a field of law emerging in every region of the globe that touches all significant aspects of the human experience. Through an examination of the burgeoning case law in this area, James R. May and Erin Daly reveal a strong overlapping consensus surrounding the meaning of human dignity as a legal right and a fundamental value of nations large and small, and how this global jurisprudence is redefining the relationship between individuals and the state.

This thought-provoking introduction provides an incisive overview of dignity law, a field of law emerging in every region of the globe that touches all significant aspects of the human experience. Through an examination of the burgeoning case law in this area, James R. May and Erin Daly reveal a strong overlapping consensus surrounding the meaning of human dignity as a legal right and a fundamental value of nations large and small, and how this global jurisprudence is redefining the relationship between individuals and the state.

• Discussion of dignity as a value and a right in different major legal contexts, and its roots in African, Asian, European and Islamic traditions.

This Advanced Introduction will be invaluable to scholars and students of law, particularly those interested in human rights, looking to understand this emerging area of law. It will inform lawyers, judges, policymakers and other advocates interested in how dignity and the law can be used to protect everyone, including the most vulnerable among us.

Critical Acclaim
‘This book offers a compelling introduction to human dignity, the organizing constitutional idea of the postwar era. Reaching beyond western religion, philosophy, and constitutional law, May and Daly expound an idea that is global in its reach and transformative in its ramifications. This book will be of interest to anyone seeking to understand what a legal order that lived up to the demands of human dignity might look like.’
– Jacob Weinrib, Queen’s University Faculty of Law, Canada

‘This book is a very complete contribution to the meaning of dignity seen as a universal value and right, with important insights on legal doctrine and policies all over the world. It demonstrates that, inherent to all of us, dignity implies that every single human being must always be treated as a person.’
– Paul Cassia, University of Paris 1 Panthéon-Sorbonne, France

‘With this Advanced Introduction to Human Dignity and Law, Professors James R. May and Erin Daly deliver a global perspective on this “very important idea”. A mine of legal materials gathered from around the world, this volume brings together essential knowledge on human dignity in a concise and engaging manner. Buzzing with energy, Professor May and Professor Daly's Advanced Introduction is a must read for all those promoting dignity rights, as well as all those curious about the great adventure of humanity and democracy.'
– Catherine Dupré, University of Exeter, UK

‘This book is a timely and methodical overview of dignity law, a concept that has been somewhat neglected in legal discourse and legal theory. And yet dignity is the bedrock of law, as reflected in several international human rights documents and the many constitutions drafted at the end of the last century. The reflections and the arguments raised by James R. May and Erin Daly are particularly prescient at this time, as we emerge from one of the greatest challenges facing humanity. As we strive to reconstitute our lives and the law, James R. May and Erin Daly’s thoughtful perspectives on dignity will serve as a tiller to navigate the stormy waters of reconstruction.’
– Penelope Andrews, New York Law School, US

‘Humanity has lost its way. We are causing unprecedented socio-ecological destruction while ruthlessly oppressing other vulnerable humans and non-human beings. We urgently need to (re)become more humble, caring, sharing and selfless co-inhabitants of a fragile planet. In this analysis, Professors James R. May and Erin Daly argue we could do so by embracing the foundational value of dignity. They reveal the importance of dignity as a core value of human societies the world over and how dignity manifests in law and is facilitated through law. Ultimately, this book shows how a full embrace of dignity as a core value could help us find our way again.’
– Louis J. Kotzé, North-West University, South Africa and University of Lincoln, UK

Contents
Contents: 1. A very brief overview of a very important idea 2. Dignity and Human Rights 3. An Emerging Overlapping Consensus on the Meaning of Dignity Under Law 4. The Value of A Life: Intrinsic Worth, Agency, and Autonomy 5. The Life of the Mind: Intellectual and Emotional Integrity 6. Living With Dignity 7. Towards a Democratic Theory of Dignity Index