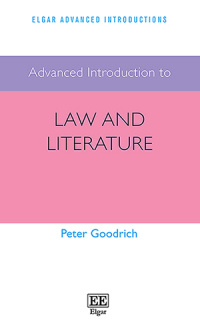 Advanced Introduction to Law and Literature

9781789906011 Edward Elgar Publishing
Elgar Advanced Introductions series
Peter Goodrich, Professor of Law and Director of the Program in Law and Humanities, Cardozo School of Law, New York, US and Visiting Professor, School of Social Science, New York University Abu Dhabi, United Arab Emirates
Publication Date: 2021 ISBN: 978 1 78990 601 1 Extent: 144 pp
Peter Goodrich presents a unique introduction to the concept of jurisliterature. Highlighting how lawyers have been extraordinarily productive of literary, artistic and political works, Goodrich explores the diversity and imagination of the law and literature tradition. Jurisliterature, he argues, is the source of legal invention and the sign of novelty in judgments.

Peter Goodrich presents a unique introduction to the concept of jurisliterature. Highlighting how lawyers have been extraordinarily productive of literary, artistic and political works, Goodrich explores the diversity and imagination of the law and literature tradition. Jurisliterature, he argues, is the source of legal invention and the sign of novelty in judgments.

• a literary approach to viewing law
• exploration of the visual culture of the law
• engagement with the affective and performative practices of jurisliterature
• analysis of the legal style and traditional literary practices of lawyers and judges from an historical perspective.

This Advanced Introduction will be a useful and concise guide for scholars and students of law and literature. It will also be beneficial for students and teachers of courses on jurisprudence, law and the humanities and socio-legal studies.

Critical Acclaim
The book guides the reader to becoming attentive to the marginal, the incidental, that helps take her closer to law’s vanishing points: “where law encounters what it cannot formulate and does not know”.’
– Maria Aristodemou, Legal Studies

‘Goodrich and his latest book are a breath of fresh air. How welcome that is in these stifling times, and how needful for all who find themselves covered by law.’
– Gary Watt, Frontiers

‘Goodrich’s pataphysical introduction to jurisliterature illuminates analysis of ordinary legal cases with a fascinating insight into the real touch of madness present in the resolution of every case. From unexplored or forgotten elements of Western Legal Tradition the book’s acrobatic journey into the Republic of Lawyers and Judges moves towards the theatrical jurisprudence that the evolving world of the media is now imposing in unseen and unpredictable forms.’
– Paolo Heritier, University of Turin, Italy

'A master stylist and storyteller, Peter Goodrich introduces Law and Literature as jurisliterature, matterphor, and pataphysics – all terms his introduction proceeds to exuberantly unpack to the reader’s delight. Goodrich traces Law and Literature’s history as a continuous derailing of so-called pure law. This occurs in law’s earliest quasi-religious inscriptions of its sanctity. It continues in law’s present confrontations with new media, posthumanism, and trans identities. Law has always attempted to tame its narrativity, affective and imagistic qualities, and deep inventedness, while nonetheless alluding to canonical literary texts to shore up its legitimacy and argue for the universal validity of its decisions. Goodrich shows that Law has always invented. Poethical decisions and jurisliterary texts demonstrate the allegorical force of the literary that work within law, if in still unacknowledged ways. The Advanced Introduction represents an extended argument for jurists to engage with literary and visual studies, and affect and metaphor theory to move their juridical work into the future.'
– Greta Olson, University of Giessen, Germany

‘Peter Goodrich manages to entangle the copulatives that link law and/as/is/in/ literature, revealing the labyrinthine threads of verbal DNA that make law an art, a medium, and a passion. A wild ride from ancient jurisprudence written in stone to contemporary media, his text will be studied as long as lawyers are writers and readers, and as long as writers and readers seek truth, justice, and a sense of play. Who knew that law and literature could be such fun!’
– W.J.T Mitchell, University of Chicago, US
Add to Wish List
eBook for individuals
978 1 78990 600 4
From $20.76
Click here for options