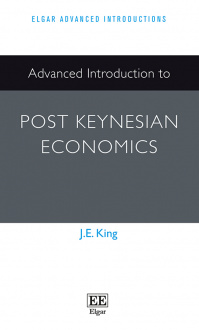 9781782548423 Edward Elgar Publishing
Elgar Advanced Introductions series
J.E. King, Emeritus Professor, La Trobe University, Australia and Honorary Professor, Federation University Australia
Publication Date: 2015 ISBN: 978 1 78254 842 3 Extent: 160 pp
This brief but comprehensive account of the Post Keynesian approach to economic theory and policy is ideal for advanced undergraduate and postgraduate students in economics, public policy and other social sciences. Clear, non-technical and with a strong policy focus, it will also appeal to all of those who are dissatisfied with mainstream economics and wish to explore the alternatives.

This brief but comprehensive account of the Post Keynesian approach to economic theory and policy is ideal for advanced undergraduate and postgraduate students in economics, public policy and other social sciences. Clear, non-technical and with a strong policy focus, it will also appeal to all of those who are dissatisfied with mainstream economics and wish to explore the alternatives.

John King sets out the distinctive features of Post Keynesian economics and their implications for the assessment of alternative proposals for domestic and international macroeconomic policy. He begins by outlining the core elements of Post Keynesian theory and explains how it differs from other schools, including the so-called 'Old Keynesian' and 'New Keynesian' theories. Subsequent chapters deal with the important methodological issues that distinguish the Post Keynesians from mainstream economists, in addition to their treatment of firms, workers and households, the analysis of economic growth and development, as well as international economics.

The Post Keynesian approach to monetary and fiscal policy, incomes and the environment is also summarized, with particular attention being paid to controversies over austerity and the reform of the financial sector and international monetary system. The Global Financial Crisis of 2007–2008 is used as a case study to illustrate many of the significant theoretical and policy questions raised in previous chapters. The relationship between Post Keynesian and other branches of heterodox economics are explored, and the book concludes with a brief discussion of the future prospects for the Post Keynesian school.
Critical Acclaim
‘The Elgar Advanced Introduction series is a very good idea and fills a real gap in the literature. John King is an excellent choice as the author of the Post Keynesian volume. In past work he has explained his preference for a Kalecki–Keynes–Marx synthesis in economy theory. He is no ideologue, however, and all the different strands of Post Keynesianism get a fair hearing. It is also made clear what Post Keynesian economics is not – almost anything called “Keynesian” in the standard textbooks.’
– John Smithin, York University, Canada

‘Post Keynesianism offers an appealing alternative to the mainstream approach to economics, which makes this volume particularly welcome. John King draws on his expertise to provide a clear, accessible and cohesive overview. He explains how Post Keynesian economics is different from other schools of thought, including other “Keynesianisms”, emphasizing its distinctive methodology. King explores the nature and evolution of Post Keynesian ideas and spells out their relevance for current economic analysis and policy-making, using the crisis as a case study.’
– Sheila Dow, University of Stirling, UK and University of Victoria, Canada

‘Advanced Introduction to Post Keynesian Economics is vintage John King. Written with his usual clarity, thoroughness and hard-headedness, he takes his readers systematically through the structure of Post Keynesian economics, its approach to the central issues and problems that face the modern inter-related world economy, and the implication for policy. King places Post Keynesianism in historical and analytical context, compares and contrasts its characteristics with other heterodox approaches, as well as to that of the mainstream. He honestly sets out limitations and realistically assesses its likely future and influence. The volume is a tour de force, as is to be expected of an author who has made fundamental contributions to many different areas over his long and productive working life.’
– G.C. Harcourt, University of New South Wales, Australia

‘John E. King’s Advanced Introduction to Post Keynesian Economics provides a superb overview of this school of thought. It covers the main areas of contribution and distinguishes Post Keynesian economics both from orthodox economics and from other heterodox schools, in a clear and accessible way. In a time of increasing demand for relevance and pluralism in economics, this book will be extremely useful for students and young researchers interested in alternatives to current mainstream economics.’
– Eckhard Hein, Berlin School of Economics and Law, Germany