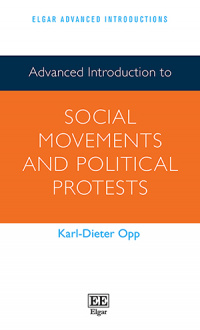 9781800887916 Edward Elgar Publishing
Elgar Advanced Introductions series
Karl-Dieter Opp, Professor Emeritus of Sociology, Department of Sociology, University of Leipzig; Visiting Professor, Department of Sociology, University of Washington, Seattle, US
Publication Date: 2022 ISBN: 978 1 80088 791 6 Extent: 194 pp
This Advanced Introduction is an accessible and critical review of the most important theories and concepts in the field of social movements and political protests. Karl-Dieter Opp precisely outlines the strengths and weaknesses of the different approaches and investigates how they can be unified into a structural-cognitive model.

This Advanced Introduction is an accessible and critical review of the most important theories and concepts in the field of social movements and political protests. Karl-Dieter Opp precisely outlines the strengths and weaknesses of the different approaches and investigates how they can be unified into a structural-cognitive model.

• Application of general action theory
• Investigation of the conditions for deterrence and concessions by autocracies
• Analysis of the influence of social networks and social media on protests and protesters
• Precise definitions of central concepts and clear formulation of explanatory hypotheses.

This timely Advanced Introduction will be crucial reading for scholars interested in political participation, political protest, and social movements as well as those looking for an excellent introduction to this fascinating ever evolving area of study.
Critical Acclaim
‘This truly impressive book offers an integrated theoretical approach to social movements and political protests. Opp applies his approach to help our understanding of major events, past and present, like the spread of the Protestant Reformation, and protests against the Russian invasion of the Ukraine. A must-read for social scientists.’
– Sascha O. Becker, Monash University, Australia and University of Warwick, UK

‘Opp—one of our most insightful analysts of social protest—has produced a remarkably sophisticated and theoretically rich account of how protests work, focusing as much on how targets and publics react as on the mechanisms of protest participation. This multi-sided approach opens new avenues for understanding social protests and their impact on diverse societies.’
– Jack A. Goldstone, George Mason University, US

‘This is a careful book on an important topic. It is well worth reading as it offers many new insights into a complex phenomenon with applications for current social issues, including wars.’
– Bruno Frey, University of Basel, Switzerland
Contents
Contents: Preface 1. Introduction to Social Movements and Political Protests 2. Social movements and political protests as collective action 3. Extending the context of protest: political opportunities and societal resources 4. Extending the motivational basis of protest I: framing, cognitive balance, and the goals-beliefs theory 5. Extending the motivational basis of protest II: the identity perspective 6. When protests change politics: explaining the behavior of the protest targets 7. When protests change protesters and bystanders 8. How to put all this together: the structural-cognitive model, the Protestant Reformation, the protests against the Russian invasion of the Ukraine, and some guidelines for explaining social movement phenomena References Index
Add to Wish List
eBook for individuals
978 1 80088 792 3
From $19.96
Click here for options