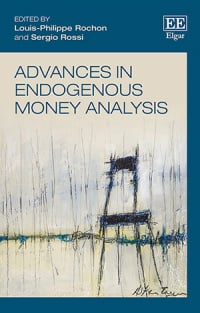 9781845429430 Edward Elgar Publishing
Edited by Louis-Philippe Rochon, Full Professor, Laurentian University, Canada, Editor-in-Chief, Review of Political Economy and Founding Editor Emeritus, Review of Keynesian Economics and Sergio Rossi, Full Professor of Economics, University of Fribourg, Switzerland
Publication Date: 2017 ISBN: 978 1 84542 943 0 Extent: 464 pp
The endogenous nature of money is a fact that has been recognized rather late in monetary economics. Today, it is explained most comprehensively by the theory of money in post-Keynesian monetary theory. The expert contributors to this enlightening book revisit long-standing debates on the endogeneity of money from the position of both horizontalists and structuralists, and prescribe new areas of research and debate for post-Keynesian scholars to explore.

More Information
Contributors
Contents
More Information
The endogenous nature of money is a fact that has been recognized rather late in monetary economics. Today, it is explained most comprehensively by post-Keynesian economic analysis. This book revisits the nature of money and its endogeneity, featuring a number of the protagonists who took part in the original debates in the 1980s and 1990s, as well as new voices and analyses. Expert contributors revisit long-standing discussions from the position of both horizontalism and structuralism, and prescribe new areas of research and debate for post-Keynesian scholars to explore.

Louis-Philippe Rochon and Sergio Rossi eloquently situate the nature of money and its endogeneity in an historical context, before bringing together an engaging array of chapters written by contemporary leading scholars. These chapters put forth detailed analyses of money creation; central bank operations and the role of monetary authorities; a link between interest rates and income distribution; a stock-flow analysis of monetary economies of production; and finally, a reinterpretation of horizontalism and structuralism.

3. The theory of endogenous money and the LM schedule: prelude to a reconstruction of IS–LM
Thomas I. Palley

4. Money and interest rate determination in a system with no reserve requirements
Sergio Rossi

5. New insights on the money-supply-endogeneity debate and the new ‘equity’ multiplier: some evidence from the euro area
Yannis Panagopoulos and Aristotelis Spiliotis

PART II ENDOGENOUS MONEY IN THE ECONOMIC THOUGHT
7. Money endogeneity and the quantity theory: the case of commodity-money
Allin Cottrell

8. Nicholas Kaldor and the war on monetarism
John E. King

9. The principle of effective demand and the state of post-Keynesian monetary economics
Colin Rogers

10. Endogenous money and the tyranny of demand and supply
Malcolm Sawyer

11. An evolutionary–institutionalist re-appraisal of the endogenous-money-supply theory
Christopher J. Niggle

15. The rate of interest as a macroeconomic distribution parameter: horizontalism and post-Keynesian models of distribution and growth
Eckhard Hein

18. An essay on horizontalism, structuralism and historical time
Mark Setterfield

19. A revisitation of the debate between the horizontalist and structuralist analyses of endogenous money: single-period analysis versus continuation analysis
Giuseppe Fontana