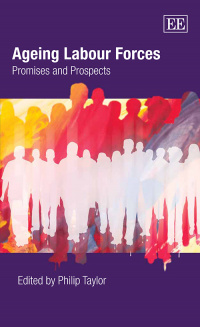 9781845424251 Edward Elgar Publishing
Edited by Philip Taylor, Professor of Human Resource Management, Federation Business School, Federation University Australia and Professorial Fellow, Institute for Employment Research, University of Warwick, UK
Publication Date: March 2008 ISBN: 978 1 84542 425 1 Extent: 240 pp
This provocative book considers the changing status of older workers, the evolution of public policy on age and work and the behaviour of employers. It attempts to answer the critical question: in an ageing society, can older workers look forward to the prospect of longer working lives with choice and security and make successful transitions to retirement?

More Information
Critical Acclaim
Contributors
Contents
More Information
This provocative book considers the changing status of older workers, the evolution of public policy on age and work and the behaviour of employers. It attempts to answer the critical question: in an ageing society, can older workers look forward to the prospect of longer working lives with choice and security and make successful transitions to retirement?

Ageing Labour Forces challenges the current stance of many governments and observers concerning policies to extend working lives. It utilises perspectives and case studies from public policy, employment policy and the attitudes and behaviour of older people. Philip Taylor argues that older workers have been at the forefront of industrialized society's efforts to respond to the crisis facing social welfare systems and the economic threats associated with population ageing. Their involvement has forced the restructuring of economies, adjustments to social welfare systems as well as redefinitions to the actual concept of old age.

Containing contributions from leading researchers in a number of countries, this work will appeal to academics and researchers interested in work, ageing and public policy as well as labour economics.
Critical Acclaim
‘Philip Taylor has produced an important and excellent edited collection on a topic of immediate and ongoing relevance. . . The case studies presented in this collection are highly accessible and rich in detail, and provide comprehensive and interesting analyses of ageing labour forces. The book challenges myths and oft-accepted statements made by policy-makers and other commentators about population ageing, older workers’ position in the labour market and in workplaces, and social supports for this segment of the labour force. In addition, the volume demonstrates the strength of the case study methodology in helping us to better understand social structures and relations. Of particular value is that the contributions are from researchers from varied disciplines across advanced industrialized countries. . . this collection is highly valuable for policy-makers, employers, unionists, and academics, and should not be ignored.’
– Vivian Shalla, Labour/LeTravail

‘This book makes an important contribution to the policy debate about age and the workforce, and will be valuable both to academic researchers interested in the labour market and ageing policy, and to policymakers who wish to understand the diversity of national approaches to a shared agenda. . . This book sheds new light on the differences between countries’ approaches to the common policy issues, and highlights some of the issues which policy needs to address. Taylor’s overarching argument that we should be cautious about making over-positive assumptions about the benefits of extending working life is timely.’
– Stephen McNair, Ageing and Society

‘The book is extremely valuable for policy makers, labour market and welfare (pensions) experts and the social partners, because it contains a comprehensive analysis of the legal, institutional, welfare and employment policy developments over the past few decades in the eight countries. It offers policy guidance and examples of good practices for dealing with an ageing workforce, but also showing the adverse effects of well-intentioned policies and legislation.’
– Hedva Sarfati, Relations Industrielles/Industrial Relations

‘Ageing Labour Forces is a provocative work, which will appeal to academics and researches interested in work, ageing and public policy, as well as labour economics.’
– SirReadaLot.org

4. Sing if you’re Glad to be Grey. Working Towards a Happier Older Age in the United Kingdom
Philip Taylor

5. Age and Work in the United States of America
Sara Rix

7. Pulling up the Early Retirement Anchor in France
Anne-Marie Guillemard and Annie Jolivet