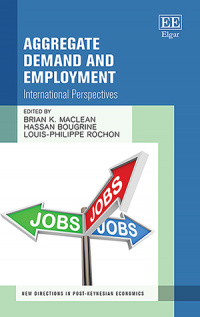 9781786432049 Edward Elgar Publishing
New Directions in Post-Keynesian Economics series
Edited by Brian K. MacLean, Full Professor of Economics, Hassan Bougrine, Full Professor and Louis-Philippe Rochon, Full Professor, Laurentian University, Canada, Editor-in-Chief of Review of Political Economy and Founding Editor Emeritus, Review of Keynesian Economics
Publication Date: 2020 ISBN: 978 1 78643 204 9 Extent: 208 pp
With an emphasis on developments during and after the Great Recession, and paying due attention to the impacts of austerity policies, the chapters assembled for this book explain that high growth of aggregate demand is as essential as ever for achieving full employment and rising living standards. Written by distinguished Keynesian and Post-Keynesian economists from diverse national backgrounds, the book tackles critical theoretical and empirical issues to illuminate the economic experiences both of large geographic regions such as Europe, Latin America, and Africa, as well as specific national economies including the USA, Japan, India, and Canada.

More Information
Critical Acclaim
Contributors
Contents
More Information
Written by distinguished Keynesian and Post-Keynesian economists from diverse national backgrounds, this book examines the economic growth and employment experiences of both large areas of the world and specific economies. Dealing with critical issues in macroeconomic theory and policy, this book puts current issues in a historical perspective.

Emphasising developments during and after the Great Recession, and paying due attention to the impacts of austerity policies, chapters explain that high growth of aggregate demand is as essential as ever to achieving full employment and rising living standards. Organised into three distinct thematic parts, the book moves from discussing theoretical considerations, to aggregate demand and employment in the EU, Latin America and the developing world, to individual country studies including Canada, India and Japan.

Economics students, particularly those interested in heterodox economics and macroeconomics, will find the accessible language and perspectives on a range of major regions helpful. This will also be a useful read for macroeconomic policy-makers looking for a more in-depth understanding of the importance of boosting aggregate demand.

Critical Acclaim
‘This volume features an all-star cast of some of the world’s leading heterodox economists, evaluating the state of economics a decade after the global financial crisis, and identifying promising directions for a more realistic and humane approach to both theory and policy. The key lessons of this troubled time are still denied by orthodoxy: namely, that aggregate demand is predominant, and knee-jerk austerity only exacerbates the failures of deregulated, financialized capitalism. Combining careful empirical evidence with thoughtful criticism, these essays locate important chinks in the armour of conventional doctrine, and lead us toward better approaches. It’s a powerful, and ultimately hopeful, collection.’
– Jim Stanford, Centre for Future Work, Australia

‘A challenging set of essays indeed. “High ... aggregate demand is ... essential ... to full employment and rising living standards.” There is a negative relationship between unemployment and growth, and a positive one between growth and real wages. But, how to square this with fashionable views about the limits to growth?’
– John Smithin, York University, Canada

‘. . . this book assembles essays by distinguished economists in the Keynesian and Post Keynesian traditions, offering a unified analytical framework for the recent economic experiences of large parts of the world. . . These essays therefore pose important questions, beginning with the most central: given that the crisis did occur, would a more progressive, more expansionary, more Keynesian policy have produced a faster recovery and a better long-term condition? This question can, in effect, be taken as a template for the entire book, which explores the potential consequences of better policies in a range of settings, some related directly to the Great Financial Crisis and others bound to it not so much directly, as by the pervasive application of mainstream policies to analogous situations.’
– from the Foreword by James K. Galbraith
Contributors
Contributors: H. Bougrine, J.K. Galbraith, B.K. MacLean, J.W. Mason, L. Osberg, L.-P. Rochon, M. Sawyer, M. Seccareccia, S. Sen, J. Toporowski, M. Vernengo